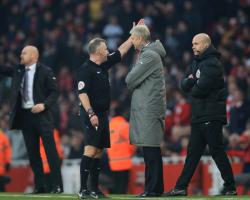 The Frenchman was sent to the stands by referee Jon Moss after allegedly using abusive or insulting language towards fourth official Anthony Taylor after an injury-time penalty was awarded to the Clarets.

Wenger then tried to watch the remainder of the contest from the entrance to the tunnel and was shown pushing Taylor, who was asking him to retreat.

Arsenal went on to win the game 2-1 after being awarded an even later penalty of their own, but Wenger was charged on Monday and revealed ahead of the Gunners' FA Cup fourth-round tie at Southampton that he will not contest the decision.

When asked if he would accept the charge, he replied: "Yes, I answered that in the press conference, I have little more to add

I am big enough to stand up for what I do.

"When I don't behave like I think I should behave, I am big enough to say I am not right.

"I'm a passionate guy and I believe that I am completely committed in my job and want to win the football games."