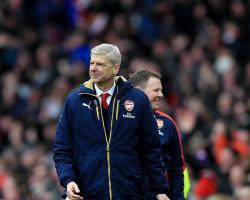 Leicester could have opened up an eight-point lead on Arsenal with victory at the Emirates Stadium and they took the lead through a first-half Jamie Vardy penalty.

A red card for Danny Simpson proved a pivotal moment though as Arsenal hit back to win, substitutes Theo Walcott and Welbeck blowing the title race wide open as they both scored to complete a 2-1 comeback win.

Walcott finished coolly from Olivier Giroud's cushioned header before Welbeck, back after 10 months out with a knee injury, glanced Mesut Ozil's free-kick past Kasper Schmeichel in the fifth-minute of stoppage time.

And Wenger, whose side are looking for their first league crown in 12 years, admitted a loss would have severely hampered Arsenal's chances.

"A loss today would have been massive, yes," he said.

"Even after that you get all the negative vibes, the belief goes down, it would have been much more difficult

We would not have given up, but eight points is three games to come back

"Every time we had the ball, I didn't have too much time to think, because I thought something could happen there

And they just managed always to get the ball out.

"It will strengthen our belief that we are in the fight

Now after that we won two games and we are still mathematically in the fight, that will strengthen our belief of course."

For Leicester this was just a third league defeat of the campaign, one of the others coming in a 5-2 reverse to Arsenal in September, and they remain clear at the head of the table.

Manager Claudio Ranieri revealed his players will now be given a week off ahead of an attempt to get their title bid back on track against an out-of-form Norwich in a fortnight.

The Italian said he was upset with the manner of the defeat on Sunday and was not a fan of referee Martin Atkinson's performance.

Asked how his players were feeling, Ranieri said: "Very sad

"My reaction is to laugh with you because I am strong and I want my players to follow me.

"If I think about the match I am very angry because I think maybe I make mistakes, but an international referee gave two yellow cards for normal fouls and the match was full of fouls.

"But I am very proud of my players

They showed a fantastic performance.

"Also sometimes the referee stopped the time at 94 (minutes), four minutes' extra time, but there was five minutes extra time when they scored

Sometimes they stopped when it was a corner or a free-kick, finished

We continue to fight."