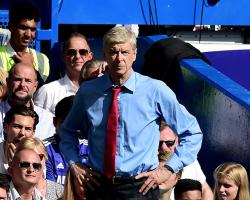 The Gunners go into the north London derby on the back of successive defeats, losing 2-0 at Chelsea following the away loss in their Champions League opener to Dinamo Zagreb.

Wenger believes his men were on the victims of some rough justice in both matches, seeing forward Olivier Giroud sent off in Croatia while there were controversial red cards for both defender Gabriel and midfielder Santi Cazorla at Stamford Bridge following Saturday's fiery Premier League encounter.

The Arsenal manager, though, hopes having another big showdown can help his players get back on track.

"I believe we were unfortunate in Zagreb to have a man sent off, and at Chelsea as well, but you want your players to behave in a perfect way and not to show any response at all," Wenger said on Arsenal Player.

"We have shown our frustration a little bit in both situations and you cannot afford that."

Wenger continued: "We want to get back into winning habits and that is why the momentum is even more important for us.

"Every single game that you play with Arsenal you want to win, especially this one which is a bit more special because it is always a big meaning."

Tottenham beat Crystal Palace 1-0 on Sunday to move into ninth place, and just a point behind Arsenal.

Wenger has been impressed by the development of Mauricio Pochettino's squad.

"They had a slow start but since then they have had two good wins, so that will have boosted their confidence," the Gunners boss said.

"It makes you think it will be a very even game tomorrow."

Wenger suggested he would not be intending to blood too many youngsters at White Hart Lane, with Alex Iwobi and Glen Kamara perhaps the most likely to be promoted to the senior squad.

"We go game by game, so I will make changes, for sure

How many? I have not decided yet," said Wenger,

"It will be quite an experienced squad with one or two younger players."

While Gabriel and Cazorla are suspended, centre-back Per Mertesacker is available again following illness.

Defensive midfielder Francis Coquelin picked up a knee problem during the first half at Chelsea.

Wenger said: "His knee is swollen and he is being assessed, but we hope it is just a short term problem."