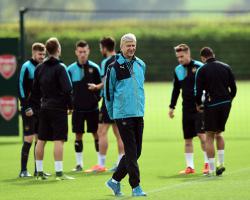 The Gunners host Olympiacos on Tuesday night needing to recover from a disappointing opening Group F defeat away to Dinamo Zagreb, where striker Olivier Giroud was sent off.

Given their next European fixtures are home and away ties against Bayern Munich, Wenger accepts it is now all or nothing for his team when they run out at the Emirates Stadium.

"We cannot afford to drop points now against anyone at home," he said.

"You have to win your home games if you want to qualify from the group stage, it is simple as that."

Arsenal and Olympiacos are in the same group for the fourth time in seven seasons, with each of the six preceding games having been won by the home team.

Wenger, though, is not expecting an easy ride against the Greeks.

"Olympiacos dominates their league, they are a team with a big advantage - they dominate their league easily, so they can prepare for these kinds of games," he said.

Arsenal host Barclays Premier League leaders Manchester United on Sunday, but that will not impact on Wenger's team selection, although goalkeeper David Ospina could again be preferred to Petr Cech.

Defensive midfielder Francis Coquelin has returned to training following a knee problem which kept him out of Saturday's 5-2 win at Leicester.

Wenger feels the intensity of the Premier League can have a detrimental impact on hopes of a successful European campaign, with three of the four English sides having lost their opening Champions League matches.

"It is true that mentally you cannot ease off before a Champions League game as some others can," he said.

"Olympiacos won comfortably on Saturday, when we were in a high intensity game at Leicester, they were safe after 20 minutes.

I cannot do that at Leicester."

Wenger added: "For sure the Premier League is demanding and consuming energy wise, mentally more than physically because physically you recover."

Midfielder Alex Oxlade-Chamberlain could come back into contention for a place in the starting XI, having impressed in last week's Capital One Cup win at Tottenham.

Wenger feels the 22-year-old needs to believe in what he can achieve.

"I see him train every day, he is dedicated, focused, hungry," the Arsenal manager continued.

"His dad said he lacks a bit of self-belief and I can confirm that because he is very critical of himself, but that is positive and a sign of top level sportsmen.

"You have to, of course, find the right balance, (being) not happy with what you do without harming the confidence.

"He is maybe not happy enough with his performance after the games and sees only what he has not done well, not enough what he has done well."