Arsene Wenger- Arsenal players have fantastic spirit and will bounce back 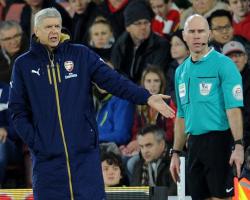 The trip to St Mary's seemingly offered the Frenchman's side a great chance to go top of the Barclays Premier League, but a poor display saw them return to north London reeling from a shock 4-0 defeat.

There is little time for Arsenal to wallow, though, as the hectic festive period means they take on another south-coast side on Monday.

Bournemouth will look to ratchet up the pressure, but Wenger is confident of a positive response at the Emirates Stadium.

"I believe what I say to my players is between my players and myself," he said after the 4-0 hammering at St Mary's.

"These players have fantastic spirit and they can show that in 48 hours.

"We are in a job where we have to respond

We want to respond from disappointments.

Nobody, not even the best players in the world, can have that.

"It's down to how you respond and I trust my players to respond in a very strong way on Monday."

Wenger certainly will not be taking Bournemouth lightly and praised the promoted side ahead of a match which could see the Gunners belatedly reach the Premier League summit.

Surprise leaders Leicester do not face Manchester City until Tuesday, but Wenger is not concerned about starting 2016 in pole position.

"I said before the game, whether we are one point behind or one point in front it is not too important," he said.

"It is the quality of our performance that counts and we were not good enough to win the game (against Southampton).

"We have just to look at that

On the other side, we can't dwell too much because in 48 hours we play again.

"We are disappointed and frustrated, but there's only one way to respond in 48 hours."

Wenger rejected former England manager Glenn Hoddle's belief that the players choked due to the pressure brought by potentially going top, so too the necessity to dip into the transfer market next month.

The Gunners boss downplayed speculation linking Arsenal to Basle's Mohamed Elneny and was keen to underline the quality waiting that will be at his disposal after injury.

"That's always the question you get," Wenger said

"We have many players who are injured and will come back soon.

"I think it's true that we couldn't score, but we conceded goals (against Southampton) and we have enough defenders."