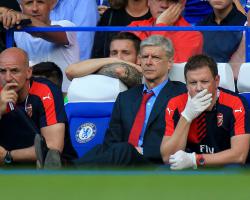 Reigning Barclays Premier League champions Chelsea travel across London to the Emirates Stadium a massive 19 points behind the Gunners, who sit top of the table on goal difference.

A 2-0 victory over Arsenal in September is one of just six league wins all season for last years' title winners, with Guus Hiddink now at the helm following Jose Mourinho's sacking.

Wenger's side have already proven they now have the steel to beat their main rivals - with victories over Manchester United, Manchester City and Leicester already secured.

And the Frenchman believes the visit of Chelsea is another chance for his players to show Arsenal can win their first title in 12 years.

"It's another game where people look at us and see how we behave," he said.

"Even if Chelsea are not in the best position, look at their squad

It's a big game because of the quality of the players on the pitch.

"It has a big importance to us as well

We play at the Emirates and know how important it will be to win this game."

Olivier Giroud also feels the need to beat Chelsea as the France striker knows there are a number of clubs who are still involved in the title picture.

Arsenal have drawn their last two games, conceding a late leveller in a 3-3 draw at Liverpool before being held to a 0-0 at Stoke, but remain top as other title contenders also struggle for consistency.

"We needed to bounce back after the Southampton defeat (on Boxing Day) and now we are on a really good run," he told Arsenal Player.

"It's a bit of a shame that we conceded a draw at the end of the Liverpool game, but it was a fantastic game for the spectators and it was one of the best games I've played in for Arsenal.

"The race is very tight because Leicester City and Manchester City will be fighting as well.

"We have a bit of an advantage over Manchester United and Tottenham at the moment but they could come back if you lose two games, you never know.

I used to say that football is an everlasting new beginning and that's like life too.

"Every week you have to push yourself out of your comfort zone to give your maximum so that you can win every possible game."