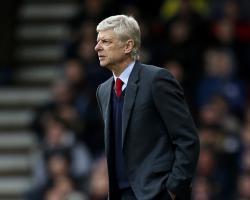 The Gunners ended a slump of four Barclays Premier League matches without a win at Bournemouth, easing to a 2-0 victory thanks to Mesut Ozil and Alex Oxlade-Chamberlain's strikes within 88 first-half seconds

Having been top at the turn of the year, victory at the Vitality Stadium takes Wenger's side to within five points of current leaders Leicester - who stunned Manchester City with a 3-1 success at the Etihad Stadium on Saturday.

Compared to Arsenal's shaky form, the Foxes have been steadfast in their quest for a most unlikely title success and Wenger admits they arrive in north London as favourites for the crown

"Look, in one week Leicester has beaten Liverpool and Man City," Wenger said.

"So that means suddenly they become the favourite in the league

That makes our game on Sunday a very big one.

"I think we needed to win the game

I do not want to be too dramatic with making statements

We had to win

"We can just control our performances and to show that we believe in it, you know, and that we have the level to do it

"Leicester now is the favourite

We have a big game at home now against them, and I believe we have enough quality and nerves to deal with that."

Other than the pivotal minute-and-a-half that saw Ozil finish well from Olivier Giroud's cushioned header and Oxlade-Chamberlain score his first Premier League goal in 17 months, Arsenal were kept quiet by Bournemouth.

Petr Cech had to be alert to deny the Cherries on a number of occasions, b ut Wenger says it was all about getting the points and ending a run of three points from four games

"Yes, of course," the Frenchman replied when asked if the result was more important than the performance in a match which saw them end a near five-and-a-half hour wait for a goal.

"For two reasons, one we haven't won for a while, we had four games without a win.

"When you play at the top, that's a long period, confidence drops a little bit

Also Leicester running away and us playing them next week, to make the game interesting, it was very important for us to win today."

Bournemouth remain five points clear of the relegation zone after the defeat, with manager Eddie Howe bemoaning a costly poor start to the game.

"We were slow out the blocks today," he said

"The quality of the goals, especially the second one from a tight angle, made it difficult for us

"After that we were unable to find a goal that would get us back into it and put them under pressure."