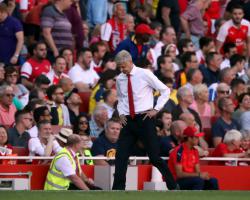 Arsene Wenger was interviewed on BT Sport after the game and when he was questioned about spending money he replied "what is important is that when you have a club with 600 employees you make sure you can pay everybody at the end of the month."

There was an instant reaction on Twitter with comments such as "You have to be joking he [Arsene] is on ÃÂ£8m a year, or "so we can't buy a ÃÂ£50M striker cos [sic] Sandra in the canteen is on ÃÂ£10 per hour?"

You get the gist.

With Usmanov still waiting, and being blocked in the wings, now reportedly interested in investing in Everton, the prognosis for Arsenal fans is not too optimistic

They have huge cash reserves

Their season tickets are amongst, if not the most expensive in the whole of Europe

10 years since leaving their beloved Highbury, many Arsenal fans are asking themselves where have these promises gone?

Where do you stand on Wenger?