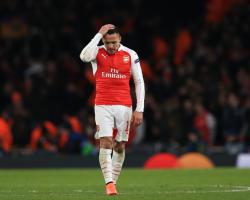 The Gunners travel to Manchester United on Sunday afternoon on the back of a goalless FA Cup fifth-round draw with Hull and a 2-0 Champions League defeat to Barcelona.

But Wenger's side remain well and truly in the mix for the Premier League crown, which Arsenal last lifted in 2004, after beating leaders Leicester in their last outing.

The trip to Old Trafford will invoke memories of the scintillating 3-0 success over United at the Emirates Stadium earlier in the season, where a brace from Alexis Sanchez and a goal from Mesut Ozil had the hosts three goals up inside the opening 20 minutes.

United were outplayed for much of that contest but, despite their lofty league position, Arsenal have struggled to replicate anything like that sort of form in recent weeks and Wenger has already spoken of his concern for the goals 'drying up'.

But he believes the likes of Sanchez, Ozil and Olivier Giroud can rediscover their goalscoring touch and impressive form to make sure they do not let a great chance to seal a 14th top-tier title slip through their grasp.

"They will all get back (to their best)," said Wenger.

"We have to raise our level at the right moment

You want to raise your level and after, individually, the players will benefit from that.

"When we attack well, Sanchez will be very dangerous so we have to focus on attacking well together and after that it's important to remember that we worked very hard to be in this position.

"At half-time against Leicester (losing 1-0), we were eight points behind them

Today we are two points behind

We have to take advantage of that."

United are 10 points adrift of Arsenal heading into the game after a season where an inconsistency in form, results and team selection has seen Louis van Gaal's position as manager come under threat.

Despite their struggles, they could still produce a result to dent Arsenal's championship ambitions and Per Mertesacker has called on a similar effort to the 3-0 win back in October - even if he believes a replication of the start may be a stretch.

"It will be a different game this time but I want to see the same effort from our side," he told Arsenal Player.

"I think we came out really strong, trusted in ourselves, nicked balls from them in their final third and then broke them down

It was remarkable how we played and how we reacted.

"We were really active from the start, pressed them high and tried to get the ball as quickly as possible

It completely worked out.

"That was our plan, to get the ball early, so the distance between where we got the ball and the goal was short

We are dangerous when we win the ball early

I think that's something we need to emphasise."

Former United forward Danny Welbeck will be hoping to be involved for Arsenal having scored the last-gasp winner against Leicester on his return from a 10-month injury lay-off.

Alex Oxlade-Chamberlain will definitely not be involved after suffering a knee injury in the defeat to Barcelona.