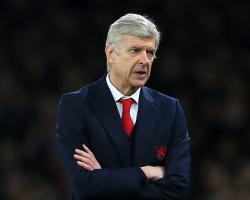 The England international suffered a knee injury in Tuesday night's Champions League defeat to Barcelona after a challenge from Javier Mascherano and was forced off early in the second half.

Now the 22-year-old faces another spell out having already spent time on the treatment table with an unrelated knee problem earlier in the campaign.

Wenger admits it is a "quite serious" injury but he hopes the specialist set to see Oxlade-Chamberlain can give the club a good prognosis.

"We lost Oxlade-Chamberlain on Tuesday night," he said.

Hopefully we will have good news.

"He is out for a few weeks

How long exactly? I don't know but a few weeks

Let's hope that we get good news that it's only two or three weeks, not six or seven."

Asked if there was a risk Oxlade-Chamberlain could be in danger of missing out on Euro 2016, Wenger replied: "I don't think so.

"It's not a recurrence of a previous injury

It's a new injury

Hopefully we will have good news later.

"I don't think it was a malicious tackle

It was a fully committed tackle but it didn't look malicious."

Following the 2-0 loss to Barcelona and a goalless FA Cup fifth-round draw at home to Hull last weekend, Arsenal return to league action at Manchester United on Sunday.

The Gunners go into the weekend just two points off the top of the table but, with an FA Cup replay and the return leg in Spain to come, Wenger's men face a run of seven games in 22 days.

"We work the whole season for this period and that's where you're really tested but it's where you have an opportunity to show your quality as well.

It's a period of the season where you can show quality, nerves and desire as well.

We need to get over the disappointment of the result in the Premier League.

How many points that will be needed, we don't know

Let's not set any limit on the number of points we can get."

While Arsenal are chasing a first league title in 12 years, United are now outsiders for finishing in the top four with Louis van Gaal's side winning just two of their last six Premier League games

They were also thoroughly outplayed in a 3-0 defeat at the Emirates Stadium in October.

The Dutchman's position remains under threat despite a week that saw them advance in the FA Cup and Europa League and, while Wenger still sees a trip to Old Trafford as a glamour fixture, he also offered his sympathy to Van Gaal's plight.

Of course he (Van Gaal) has my respect and my sympathy," he added.

"What can you do? Not a lot but do your job and use your potential of resistance to stress and focus on your job.

"Man United is a big club, Old Trafford is a special place and I believe for every club it remains a special fixture."