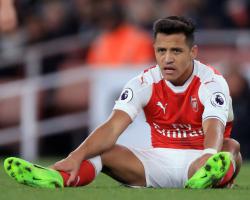 When asked if Sanchez's decision could also come down to money, Wenger said: "I believe that basically he wants to stay at the club and it's down to finding an agreement with his agent

"I think the players first have to see are they are happy to the club and after (that) most of the time it's down to finding an agreement, but the finances are involved in it, yes."

Speaking at his press conference to preview Arsenal's home clash with Crystal Palace on Monday night, Wenger p layed it cool as he straight-batted questions designed to catch him out as speculation continues to rage over his Gunners future

Fan protests calling for Wenger to go had gathered pace in recent weeks but a 3-0 win against West Ham on Wednesday night ended with supporters staying behind to chant the Frenchman's name.

When asked whether an announcement would come from himself or the club, Wenger simply said: "From the club."

Another question followed asking there were any pre-requisites in any potential new deal to which he replied: "No, nothing to add to that."

Arsenal's pre-season plans were brought up with the aim of catching Wenger out but the question was again met with a straightforward response: "Of course (plans are in place for pre-season)

No (that does not suggest he will stay), it's just that I do my job to plan for the future of the club."

"I cannot not tell you now (if a decision will come before the end of the season) because I don't know, I am focused on our next game."