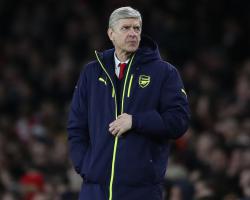 The Bundesliga champions recorded the same scoreline as their first-leg demolition at the Allianz Arena thanks to goals from Robert Lewandowski, Arjen Robben, Douglas Costa and a brace from Arturo Vidal but Wenger's dismay stemmed from the dismissal of defender Laurent Koscielny early in the second half.

After Arsenal were denied what seemed to be a clear-cut penalty for a foul on Theo Walcott in the first half, Sidiropoulos sent off the France international after originally showing the Gunners skipper a yellow card

He altered his decision and dismissed Koscielny after a conversation with the assistant referee behind the goal.

Despite another humiliating exit from Europe, Wenger insists he was "revolted" by the decision and despite taking a deserved lead on the night thanks to Walcott's opener, the Arsenal boss was adamant that the red card turned the second leg in the Bundesliga side's favour.

"When you see the importance of the games and you see an attitude like that I am absolutely revolted and sorry for people who come and pay a lot of money to watch this kind of game," Wenger said.

"Personally I would say we put Bayern under pressure but we were unlucky tonight because it was 100 per cent a penalty in the first half on Walcott, check on the television

In the second half, the referee killed the game.

"After that it was very difficult but the referee was very, very powerful in the game tonight

"Overall, I must say Bayern, they are a good side, but tonight they can as well say thank you to the decisions of the referee in the second half."

Wenger refused to discuss his long-term future at the Emirates as talk of his possible exit from the club intensifies.

Pre-match protests consisting of around 200 supporters outside the old Highbury home against Arsenal's hierachy and Wenger's position highlighted the mood among fans in north London as the club are all-but out of the Premier League title race and have succumbed to a disappointing showing in Europe.

With Wenger facing one of the most challenging seasons on and off the field during his 21-year reign, the Frenchman refused to blame his players for their recent form but would not clarify the board's stance on his own position.

"I don't know," Wenger answered when asked if he will manage Arsenal in the Champions League again.

"You always write for headlines, I am here to speak about football not my future

I think tonight there was no uncertainty in our game

I felt that we played very well and it was more the decisions of the referee who killed the game.

Meanwhile, Bayern boss Carlo Ancelotti refused to get drawn into discussing Wenger's problems and insists that he solely wants to focus on his own side.

When asked what needs to change at Arsenal, Ancelotti said: "No, I know what we are to change at my club but don't ask me this

I am not the right person to answer to this question

He (Wenger) has more reason to answer.

"I am not the owner of Arsenal

I said yesterday, Wenger has more experience than me, he knows better than me

He has to manage the pressure, this is normal

We won but I feel pressure for the next game so this is the pressure of our life."