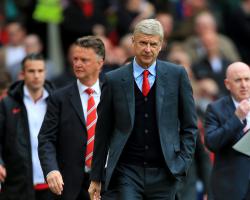 Conflicting reports have suggested the Dutchman is set to lose his job at Old Trafford in the coming days while others say he may still see out the season.

Only two weeks ago United were saying van Gaal would be at the helm for the remainder of his contract, which expires at the end of next season, but since then the club have gone on a woeful run.

Van Gaal's situation has come under intensified scrutiny since Chelsea sacked Jose Mourinho last week - with many putting two and two together and suggesting he would be the man to be installed as the immediate replacement at Old Trafford should van Gaal be ousted.

United have not won in six games and a home defeat to Norwich on Saturday was their third loss in succession, leaving them outside the Barclays Premier League top four after being knocked out of the Champions League at the group stage.

The Red Devils travel to Stoke on Boxing Day and it remains unclear if van Gaal will be at the helm - but Arsenal boss Wenger, whose side outclassed United in a 3-0 win earlier in the season, believes past successes mean the former Holland coach should be given time to address the issues at the club.

Speaking of Mourinho's sacking and his next managerial move, Wenger launched a defence of van Gaal amid speculation he will be replaced by the former Real Madrid coach.

When asked if he could see Mourinho turning up at Old Trafford, Wenger replied: "I do not want to go into a world of speculation.

"I personally have a huge respect for Louis van Gaal and I think what is going on there is disrespectful.

I think it is a bit disrespectful what is going on there.

"I think a lot has been made on that (Mourinho's departure), and I do not need to add anything.

"I do not want anyone to lose their job, my personal feelings on that front is that it is always sad when someone loses their job."

The waters are clouded further by the fact Pep Guardiola has revealed he will be leaving his post at Bayern Munich at the end of the season.

He has been tipped to make a move to the Premier League, with Chelsea and Manchester City both heavily linked with the 44-year-old and the likes of United also likely to be interested, but Wenger feels he was wrong to make an announcement over his future at such an early stage.

"Yes, I would welcome (him) to the competition," Wenger replied when asked if he would encourage Guardiola to come to England.

"Personally I don't like the fact that the managers come out so early for what they will do, because it's not necessarily good for their own team, nor for the speculation about the managers who are going through a little bit of a difficult patch

But after, of course.

"I think he is of course a top-quality manager, nobody would dispute that

Not so much for what he has won already, because Bayern won before, Barcelona still wins today.

I respect that highly."