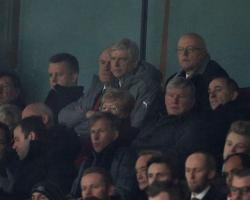 The Gunners slipped to third in the table, nine points adrift of leaders Chelsea, as early goals from Younes Kaboul and Troy Deeney set Watford up for a shock victory at the Emirates Stadium on Tuesday night.

Having struck late goals on a regular basis this season, a comeback was always a possibility for the hosts - but they could not build on Alex Iwobi's consolation as the Hornets hung on to win 2-1 and record their first league victory since December 10.

"I think we were not mentally ready to deal with the duels that we usually do," Wenger said after the damaging defeat.

But you have to switch it on at 100% every time in the Premier League, that's what it is about.

We were beaten in the duels, they were sharper than us.

"On top of that we were a bit unlucky because I felt we were unlucky to concede a free-kick and then it was deflected too.

"After that we responded

We didn't start the way we wanted, in the second half it was all us, and we were unlucky to lose the game as well

We did not deserve to lose this game."

Arsenal now go Stamford Bridge on Saturday lunchtime knowing they could fall not only further behind Chelsea but out of the top four completely if other results go against them.

They are likely to be with Aaron Ramsey, who was forced off with a calf problem with Arsenal two goals down, but Wenger has called on his players to respond against the Blues.

"What you want is to win the games and I'm very frustrated that we did not win the game, of course," he added.

"We played at home, we had a great opportunity and we have a start like we did

Of course it's frustrating and the players will have to learn from that and respond very well and very quickly in a very convincing way."

Watford's last three-point haul came two weeks before Christmas with victory over Everton, but this result will ease the pressure on manager Walter Mazzarri.

The Italian had started the season well at Vicarage Road before the slump and dedicated Tuesday''s win to the late Graham Taylor.

"Before the press conference finishes, I wanted to say that I want to dedicate this victory to a great person that was Graham Taylor," he said.

"We wanted to do it before today (against Middlesbrough) but I think today was a great game and I want to dedicate this victory to him and to the fans as well."