Arsene Wenger confident the goals will start to flow for Arsenal 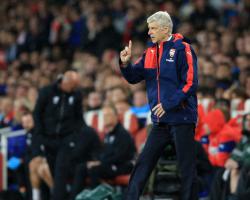 The Gunners host Stoke on Saturday having yet to find the net in their opening two home matches.

Wenger, though, remains confident the end product will come sooner rather than later provided his side maintain their focus.

"We have created the chances and that is what we want to continue to do," said Wenger, who is facing up to being without injured England forward Danny Welbeck until at least Christmas.

"I believe that the finishing is a bit cyclical, up and down, and we are the team who has created the most chances since the start of the season, so let's just continue to focus on the quality of our game."

Arsenal drew criticism for failing to bring in a replacement for Welbeck ahead of the transfer deadline after they knew the former Manchester United frontman needed surgery on a long-standing knee problem.

Wenger had hoped Welbeck, who last played in the goalless draw against Chelsea on April 18, would be set for a return soon after the international break.

He was very close, but he could not tolerate the final step up in his rehab," Wenger said to Arsenal Player.

"We always wanted to try conservative rehab first under the guidance of specialists and he did get very close.

He will be out certainly until Christmas."

Arsenal have often come unstuck against Stoke in their Barclays Premier League clashes, particularly away under former boss Tony Pulis.

Wenger, though, feels Mark Hughes' Potters, who finished last season in ninth place, are now a much different proposition.

"Stoke have been here a long time in the Premier League and they have improved their technical quality," said Wenger.

"They have (Ibrahim) Afellay, Bojan, (Xherdan) Shaqiri, (Mame) Diouf up front and Charlie Adam in midfield

They have a lot of technical players that can give you problems.

"What we want is to focus on our own performance as we want to take off at home now.

"We had two good away games with positive results in difficult places and we know at home we can be efficient against anybody."

Arsenal and Stoke have produced 18 yellow cards in their last five meetings.

Wenger, though, does not believe there should be any extra edge to the encounters, which have seen flashpoints such as when Stoke captain Ryan Shawcross left then teenage midfielder Aaron Ramsey with an horrific double leg break in February 2010.

"They have always had good teams and overall when we go to Stoke they are always specially motivated against us," he said.

"There is a little bit of history because of what happened and overall it was always very difficult for us.

"For me there was never bad blood, it was just a game that was always very difficult for us to play, but I always focus on playing football and trying to get my team to play as well as we can."