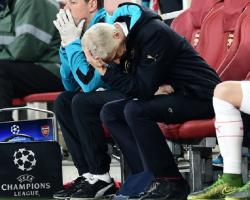 The Gunners were humbled 3-2 to Olympiacos at the Emirates Stadium on Tuesday night in what was the Greek side's first-ever victory on English soil after 12 failed attempts, but fingers were pointed at Ospina for a costly mistake

After a deflected opener for Olympiacos through Felipe Pardo and a Theo Walcott equaliser for the hosts, Ospina failed to deal with a simple corner from Kostas Fortounis and fumbled the ball over the line

When asked if he regretted leaving out Cech, Wenger bullishly replied: "I honestly don't want to go into that conversation with you."

The Arsenal boss confirmed Cech, who also sat out the defeat to Dynamo Zagreb in the previous Group F fixture, had a slight injury before the Leicester game and clearly did not want to take a gamble with Premier League leaders Manchester United visiting the Emirates on Sunday.

He added: "I make the decisions and selections for the team and I'm responsible for it

You cannot select a team by using a poll and getting everyone's opinion before the game.

You are capable to judge and I leave you to that

No keeper is mistake-free, it could have happened to Petr Cech as well."

Sitting bottom of the group and with a daunting double-header against Bayern Munich to come, many will be questioning whether Wenger can get out of the opening group stage having done so for the previous 16 seasons, but the Frenchman remains confident

"It puts us in a bad position but we are still in it," said Wenger.

"We have to think we can deal with Zagreb and Olympiacos and we need a result in our next game away from home against Bayern Munich."

"Some aspects of our game were quite good but I thought we lacked quality defensive concentration and we played against Olympiacos who defended very well.

"I believe we had a bit of bad luck as well because they had four shots on target and scored three goals and that happens once in 100 Champions League games."

"Whichever team comes here to win needs to know how to suffer, to put up with the pressure and I think that was one of the key features here today," he said.

"We ran a lot and resisted when Arsenal try and tire you, we were very well-organised defensively and had quick response to Arsenal's goals which is very important."