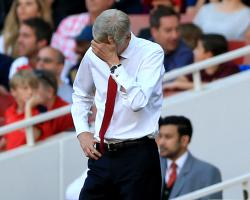 The Gunners drew 0-0 at champions Leicester to remain winless after two Premier League games leading the travelling support to voice their desire for Wenger to spend.

Boss Wenger has signed Rob Holding from Bolton and Granit Xhaka from Borussia Monchengladbach this summer but missed out on Leicester's Jamie Vardy, who rejected a move.

He was clearly irritated by transfer talk following the game and insisted he was not reluctant to spend big - as Arsenal chase their first title since 2004 - but would not splash out for the sake of it.

Wenger said: "Why do you say I'm reluctant? If I buy you tomorrow for ÃÂ£45million I have spent ÃÂ£45million and I would have done well because I will have listened to you but spending the money in itself is not a quality

Spending the money buying a top player is different and we are ready to do it.

You have to speak about money.

If we find the players to strengthen our team then we are not reluctant to spend the money.

"They (the fans) are highly influenced by the media, that's part of the process today

We try to make the right decisions, it's as simple as that.

I'm not the only one

Unfortunately no-one speaks about the performance of Rob Holding

You should be happy, he is English and 20-years-old

Wenger reserved praise for defender Holding but also felt Arsenal should have taken more than a point.

"We could have got more out of that

It was a game where we had the chances and I think it was a game of intensity and quality," he said

"They were very direct as you know and we needed to have the courage to play without making mistakes at the back.

"It was a fight until the end and you could see Leicester have some mental qualities and that explains why they were champions last year."

Vardy also failed to score as he faced Arsenal for the first time since turning down a move to the Emirates in June.

Leicester boss Claudio Ranieri refused to question referee Mark Clattenburg but instead focused on the Foxes' performance after they slipped to a 2-1 defeat at Hull on the opening day.

He said: "I don't know (whether they were penalties)

I am not a manager who says 'oh, there was a penalty'

For me it's okay

He didn't whistle and there wasn't (a penalty).

"It was a good performance

I am happy for the spirit and union of the team.

"I watched our spirit in a very good performance against a good team."