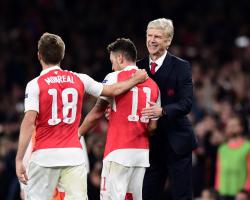 The outstanding form shown by Ozil has been the catalyst to the Gunners' climb to the top of the Barclays Premier League table heading into 2016 as they go in search of a first title in 12 years.

The 27-year-old club-record signing has been immaculate in recent weeks and has already notched up 16 assists in the league this season.

The latest came in Monday's 2-0 win over Bournemouth, with Ozil then adding the second goal himself after neat interplay with Olivier Giroud.

With the likes of Alexis Sanchez and Santi Cazorla sidelined, and Theo Walcott and Aaron Ramsey only just back from injury, Ozil has shouldered a lot of the creative responsibilities for the Gunners and Wenger feels the former Real Madrid man has developed as a result.

"When he was injured for a long period he worked very hard physically," he said of Ozil.

"He is a complete athlete

I also believe he has grown in stature and takes responsibilities, leadership in the team and on that front he has improved tremendously and looks determined to lead the team compared to when he arrived.

"I think he plays in a position that suits him well

He plays in a style of football that suits him well.

"This season he was not stopped by injuries and I believe that he arrives at an age - 27 - that you think 'it's time for me to really be efficient in every single game, and I want to enjoy every single game'."

Arsenal host struggling Newcastle on Saturday looking to hold on to top spot, which they currently occupy only on goal difference as surprise package Leicester continue to breathe down their neck.

Having made four alterations from the 4-0 Boxing Day defeat at Southampton for the visit of Bournemouth, Wenger admits he is likely to make more changes against Steve McClaren's men.

While Ozil is almost certain to start, Gabriel is another player who will be hoping to keep his place having been drafted into the centre of defence as a replacement for Laurent Koscielny on Monday.

The Brazilian moved to the Emirates Stadium from Villarreal last January but the game against the Cherries was just his 14th Premier League appearance.

He has mostly been in the role of cover for both Koscielny and Per Mertesacker but Wenger has backed the 25-year-old to push for a regular place having also opened his goalscoring account for Arsenal in the win.

"Yes, he is ready," Wenger replied when asked if Gabriel could stay in the side.

I play him in training with Koscielny, with Mertesacker, we have three central defenders that will be needed, but how I rotate them I haven't decided yet

I trust him completely.

"He wants to play more, of course

I think as well that he is happy here and I'm sure until the end of the season he will play more games."