Arsene Wenger desperate not to contract the losing 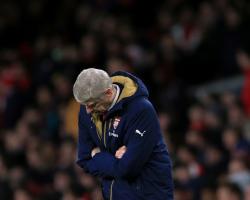 The Swans have a good recent record at the Emirates Stadium, having won there in the past two seasons with their last loss back in 2013.

A 2-1 victory for the visitors in the corresponding game back in February was highlighted by Wenger as the point which ruled Arsenal out of the Premier League title race as supporters turned on the Frenchman and the players.

The defeat followed a 3-2 loss at Manchester United and was followed with a draw in the north London derby at Tottenham, with Wenger pointing to the run as costly as the Gunners ended the campaign in second place, 10 points adrift of champions Leicester.

"We had two low points (last season)," he said.

We damaged our chances

Last year we had a very negative experience with Swansea who killed our opportunity to win the Premier League.

"We were really criticised a lot after the Tottenham game but we did extremely well.

But after that we had the negative environment after Swansea."

This time around Swansea visit with Arsenal looking to record a sixth successive win in all competitions and Wenger believes the club's supporters are now completely with the team, although he admits that can quickly change.

"I believe our fans are behind us," he added.

"It is strange because in 2016 how many games have we lost away from home? One at Man United

When you listen to people you'd never believe it

So we have to perform.

"I must say that the negativity comes very quickly

It is a virus that travels very quickly and goes away very slowly.

"I believe at the moment the vibes are positive

We have reduced distance with the top teams

We have to continue to get to the next level.

We want to perform

The rest we have to ignore

The way the team plays and what is important and accept the assessment of people around you.

My job is to focus on my job and trying to make them happy."

For Swansea, they will head to north London for Bob Bradley's first game as manager after he was appointed as Francesco Guidolin's replacement during the international break.

It will be the 58 year-old's first job in England and Wenger feels the American's arrival can only be a good thing for the Premier League.

"Bob Bradley has a lot of experience

He's not a beginner, he has travelled a lot and has accumulated experience in the United States," added Wenger.

"He has been in Egypt, France recently and is now in England which is certainly a fantastic opportunity for him

He is equipped to deal with what is asked of him."