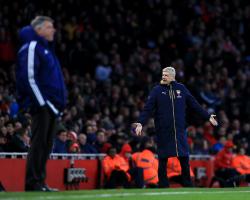 The Arsenal boss made five changes for their FA Cup third-round clash with Sunderland and saw his side run out 3-1 victors as they look to win the competition for a third successive year.

Jeremain Lens put the visitors ahead after a mix-up between Kieran Gibbs and Laurent Koscielny but Joel Campbell levelled before the break before second-half strikes from Aaron Ramsey and Olivier Giroud saw the holders through.

The Gunners also sit top of the Barclays Premier League and are back in action with a tricky trip to Liverpool on Wednesday but, with a number of players back from injury and some soon to return - plus the impending signing of midfielder Mohamed Elneny - Wenger feels his squad are ready to deal with a tough run.

"There is a little bit," he said when asked about fixture congestion.

"But I believe that the next step is to get (Tomas) Rosicky back, (Danny) Welbeck back, (Alexis) Sanchez back, (Jack) Wilshere back and maybe we will get one player in.

"Overall, I think we have no new injuries so I'm not worried

If we had the same number of injuries we would be a bit short."

While Wilshere and Welbeck may not be back until the end of February, Sanchez and Rosicky could both be in contention for the trip to Stoke next Sunday - while Mikel Arteta is already back and came on as a substitute against Sunderland.

Wenger brought in Gabriel, Kieran Gibbs, Calum Chambers and goalscorer Campbell as well as Alex Iwobi for only his second start.

The 19-year-old nephew of Jay-Jay Okocha impressed and could have been man of the match were it not for a splendid display from Hector Bellerin.

The Spanish full-back was full of running and set up both second-half goals and Wenger said afterwards he is one of the Premier League's most superior right-backs.

When asked if Bellerin was the best in his position, Wenger replied: "I don't know

Of course (he is among the best).

"Look at the defensive and offensive numbers

The fact that he is only 20 years old, there is a lot more to come from him.

"He became stronger and stronger during the game

Sometimes I felt in the last 20 minutes, every time he went forward he created a chance on goal."

Wenger has lifted the FA Cup a record-equalling six times and is hungry to complete a hat-trick of wins having won the trophy in 2014 and 2015.

"We have only one left to win," he said on winning three consecutive FA Cups.

"We have done it twice

It is a long way in the cup and you need a long run.

We had a very convincing half and took over more slowly.

After that slowly in the second half we took over, played in their half and scored great goals and created many chances."

While Wenger is content with the schedule, Black Cats boss Sam Allardyce again hit out over the number of games his side are being forced to play.

Allardyce labelled the Premier League's decision to put in a round of fixtures the midweek after the third round of the cup as "diabolical" earlier in the week and did not back track after seeing his side knocked out.

Their game at Swansea was moved to Wednesday night from Tuesday with the Swans facing Oxford on Sunday - with Sunderland's next league game an early kick-off at Tottenham next Saturday.

"I was infuriated by how the fixtures panned out and by us having to change from Tuesday to Wednesday based on the amount of travel we have to do compared to Tottenham and to Swansea," he said.

"I will be very interested in seeing Swansea's team on Sunday and see how many first-team players they actually play.

"We could have played on Tuesday, which gave us the right opportunity to recover to play in the Premier League on Saturday, which is a 12.45pm kick-off against Tottenham having travelled 1,800 miles for three away games

"I am interested in the welfare of players, which is at great risk at this stage of the season and you have seen it with the amount of injuries that have occurred at this time."