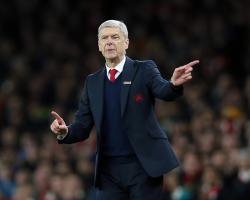 The Gunners sit at the Barclays Premier League summit but it is only goal difference keeping them ahead of the season's surprise package Leicester.

Wenger's side recovered from a Boxing Day hiding at Southampton to beat Bournemouth on Monday and face struggling Newcastle at the Emirates Stadium this weekend looking to keep hold of top spot.

By then the January transfer window will have opened and, although refusing to confirm the club were close to signing Basle midfielder Mohamed Elneny, Wenger did say he will be looking for new faces - especially as the likes of Danny Welbeck, Jack Wilshere and Francis Coquelin remain sidelined for some time through injury.

"I'll be busy, that's for sure," he replied when asked about his January transfer business.

"I'm already busy and I said already one month ago we are a bit short to deal with all the competitions we face, especially in midfield

When asked specifically about Egypt international Elneny, Wenger was more coy amid speculation the 23-year-old had already undergone a medical: "You know more than I do," he said.

"Unfortunately we cannot announce anything at the moment about this player because nothing has been concluded."

With a squad still suffering the effects of injuries to key personnel, Wenger has also been linked with moves for the likes of former Manchester United striker Javier Hernandez and Victor Wanyama of Southampton.

While revealing he hopes to have Alexis Sanchez fit for the FA Cup third-round clash with Sunderland on January 9, the prognosis on Wilshere and Welbeck has been fluctuating for some time.

Both England internationals are now due to be back in late February - but Wenger dismissed claims Wilshere could miss the European Championship in the summer as he continues his comeback from a broken leg suffered in pre-season.

"I maintain what I said that he could make it back for February or even earlier," the Frenchman said of Wilshere.

"He will be available again

Considering England play the Euros on June 10, that is a long way."

While much has been made about who will arrive in north London during the window, Wenger admitted France international full-back Mathieu Debuchy may be allowed to leave the club.

The 30-year-old has fallen below Hector Bellerin in the pecking order having missed a large portion of last season due to two serious injuries.

Debuchy, who has started just twice in the league this season and been substituted both times, said earlier in December that he needs to play to get back into the France set-up ahead of the Euros and that he was seeking talks with Wenger to clarify his future.

But the Arsenal boss suggested on Wednesday that he was open to offers for the former Newcastle man.

"It's not impossible," he said when asked if Debuchy may leave the club in January, adding: "I'm happy if he stays but we'll see."