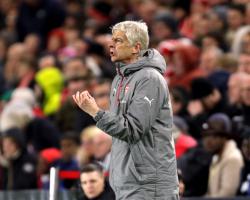 A semi-final against Manchester City on Sunday is next on the agenda for Wenger and his side following a crucial Premier League victory over Middlesbrough.

The 2-1 win was just a third success in eight games for the beleaguered Frenchman, who has seen a minority of fans call for him to leave the club when his contract expires at the end of the season.

Wenger reckons he has made up his mind on whether he will stay or go but is yet to make that decision public.

He again dodged the question when asked at his press conference to preview the cup semi-final, but did say failure to win against City, or deliver a record seventh FA Cup, will have no bearing on whether he is in the dugout at the Emirates Stadium next season.

"It doesn't play any part in that," Wenger said.

"The FA Cup is a very important game for me because it's the next game and because it's an opportunity, as I just told you, to win a trophy this season

So of course we are all fully focused on that

My future is Sunday.

I think somebody told me that I had played 10 semi-finals in the FA Cup, so that means it's a great experience and it's always something special.

"I remember my first one, we just spoke about it, when we played at Villa Park against Wolves

That's the day when I realised how big the club is, how much it means to our supporters.

"It is a special experience and, for us, I think we are focused, highly motivated

Maybe not at the maximum of our confidence because we had recently some disappointing results, but that is a good opportunity to show we are ready for a fight and how much we want to go to the final

Because it's maybe our only opportunity to get a trophy this season."

While winning a 13th FA Cup will be seen as a success for Arsenal, failure to finish inside the Premier League top four and achieve Champions League qualification would taint any victory.

But Wenger insists the club are not in a position where they have to start prioritising the FA Cup over the league.

"You don't think about it like that because we don't have to make a choice," he said.

"We are not in a position where you can make a choice, do we choose this or do we choose that? The next game is the semi-final of the FA Cup, so we have to give absolutely everything to go to the final."

Arsenal have a number of players ruled out through injury, with David Ospina, Shkodran Mustafi, Danny Welbeck, Lucas Perez and Jeff Reine-Adelaide all sidelined.

They join Santi Cazorla in the Arsenal treatment room, with Jack Wilshere also likely to be frequenting the medical facility in the near future.

Wilshere suffered a broken leg last weekend to bring an early end to a season-long loan spell at Bournemouth, a move that was aimed at giving the 25-year-old more game time.

The midfielder had appeared as a substitute in two of Arsenal's opening three Premier League games before discussions with Wenger led to him leaving on a temporary deal.

Wilshere has struggled with injuries over the past three seasons, suffering a number of ankle injuries, and was looking to prove that he can put together a run of games.

He went on to make 27 appearances for the Cherries before a challenge with Harry Kane saw him forced off in Bournemouth's defeat at Tottenham.

It means an end to his season but, with just over a year remaining on his deal at Arsenal, Wenger is still ready to offer the player a new contract.

"It's a very simple fracture of the fibula

Let's hope that all goes well," he said.

"That (Wilshere's contract) is something different

This injury is nothing to do with the extension of Jack's contract.

"We haven't entered into any negotiations yet

I think with all these cases, when there's only one year to go, (it's done) during the break."

Wenger also suggested Wilshere will remain at Bournemouth for treatment until the end of his loan agreement, when he will then start the rehabilitation process back at Arsenal's London Colney headquarters.

"Until the end of the season he's a Bournemouth player, but we have a good understanding with the medical staff," he said.

"I had a meeting yesterday with our medical staff to see how we can liaise and whether we have to bring him back.

"I've followed the situation closely because he sees a specialist

Hopefully he will be back in July for normal training.

The loan spell ends at the end of the season, so during the break all the rehab will be made here."