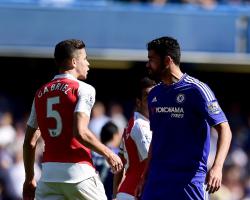 The Brazilian centre-back was dismissed for kicking out at Chelsea forward Diego Costa during Saturday's ill-tempered Barclays Premier League clash.

However, on Tuesday, the FA announced it had accepted Arsenal's challenge to the decision, which was understood to be based on television evidence showing no actual contact between the players, and withdrawn the three-match suspension

Gabriel, though, still faces a separate charge of improper conduct for his reaction after being shown the red card by referee Mike Dean, while Arsenal were charged with failing to control their players and have until 6pm on Thursday to respond.

Following Wednesday night's Capital One Cup win at Tottenham, Wenger revealed he was still troubled by how events unfolded at the weekend.

They repair five per cent of the damage which has been done to us, instead of us playing 11 against 10, we played 10 against 11," he said.

"One or two situations in the game are very difficult to understand when you watch it again."

Chelsea have pronounced themselves "extremely disappointed" after Costa was handed a retrospective three-match ban for violent conduct following his clash with Arsenal defender Laurent Koscielny, which was missed by the officials on the day.

Wenger, though, hopes to now put the matter behind them.

"I am in a job where I sometimes have to swallow things that are not right, maybe our opponents do sometimes as well

I just have to focus on the next game," he said.

Gabriel could still face a suspension and fine from the FA should he be held to account for failing to leave the field of play immediately after being shown a red card.

Wenger added: "I said to you after the game that he should not have responded at all and I maintain that and I told him that, but when I saw it again, he did not do a lot, honestly.

"The FA will judge that situation and it is right

They cannot consider the whole context of the game.

"You want them to judge, they will decide and we will accept the decision, that is no problem."