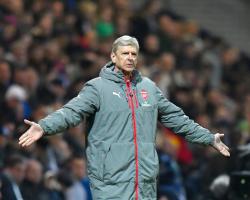 The Gunners boss said he would request a personal hearing following a Football Association misconduct charge after being dismissed from the dugout in the dying stages of Sunday's Premier League victory.

Wenger had until 1800 on Thursday to respond to the charge but revealed on Friday that he would not be contesting it.

The Frenchman was sent off by referee Jon Moss after allegedly using abusive or insulting language towards fourth official Anthony Taylor after an injury-time penalty was awarded to the Clarets.

Wenger then tried to watch the remainder of the contest from the entrance to the tunnel and was shown pushing Taylor, who was asking him to retreat.

With Wenger in the dressing room, his side rallied and earned a 2-1 win after Moss awarded them their own last-gasp penalty.

"Yes, this team has shown qualities that are very important," he said when asked if his team's approach had been lost during the frantic ending at the Emirates Stadium

"We are team that has produced more goals in the last five minutes than anyone else, it shows that we are relentless and a refusal to give in no matter what happens, we keep going."

Arsenal, who were playing with 10 men after Granit Xhaka's red card, have now taken 10 points by scoring goals in the last four minutes of six league matches so far this season.

Without those late strikes, Wenger's side would be languishing down in seventh place, rather than sitting second behind London rivals Chelsea - and the Frenchman believes that shows a certain steel.

"That is a very interesting quality in the squad

On top of that, the contribution of the players coming off the bench this season has been absolutely remarkable.

These are qualities that will be very important going into the last four months now."

Wenger takes his side to face Southampton on Saturday in the fourth round of the FA Cup, and while he intends to rest a couple of key figures, he insists his side will be a strong one.

Petr Cech, Laurent Koscielny and Alexis Sanchez sat out the third-round win at Preston but Wenger named a much more recognisable side than many of his Premier League counterparts.

"We'll put out a team with first-team experience," he said.

"Maybe there will be one or two younger players, but no more

Overall, it's the squad that will play

It's a first-team squad who will be involved."

Former Saints youngster Theo Walcott could return from a calf injury to be involved while his England colleague Danny Welbeck will be pushing for his first start since recovering from a long-term knee problem.

Arsenal were due to return to St Mary's in the league in under a month but that game will now be rearranged after Claude Puel guided his side into the EFL Cup final with a semi-final victory over Liverpool.

And Wenger believes Southampton will take plenty of confidence from overcoming Jurgen Klopp's Reds to set up a Wembley final against Manchester United.

"They produced a fantastic performance, so overall that makes the game even more interesting and more difficult as well.

"They are not short of confidence at the moment and will certainly have a big support, but it's an FA Cup game and we want to qualify."