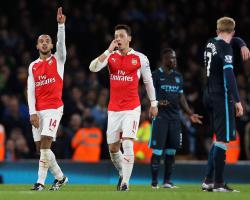 Ozil was the Gunners' ringmaster in their 2-1 triumph over their Barclays Premier League title rivals at the Emirates Stadium, setting up first-half goals for Theo Walcott and Olivier Giroud and presenting Aaron Ramsey with a superb chance after the interval.

The Germany playmaker had been unable to train all week and Wenger will approach his health with care, knowing a delay in Sanchez's recovery from a hamstring injury means the Chile forward will be missing until next month

"Ozil had a chest infection this weekend and he was in bed, basically," Wenger said

"He had only one training session.

"For a guy who could not prepare well, he has done extremely well physically

I'm a bit cautious because we lost three or four players recently.

"Sanchez will be back around January 10

We can't count on him around the Christmas period

He's had a very slight setback.

He's so keen, but he got a little pain in training two days ago and we haven't taken a gamble."

Ozil was the outstanding player on the pitch as the title rivals clashed in a match that was turned on its head when Walcott produced a sublime opener just after the half-hour mark, ending City's early stranglehold.

In the past, the ÃÂ£42.4million signing from Real Madrid has frustrated Arsenal fans for floating in and out of matches, but he was given a standing ovation when replaced against City

"In football you need one guy who gives the ball to the one who scores the goal," the Frenchman said.

"In our team, most of the time, Ozil is this player

The guys who sees makes you win, and he is that.

"Ozil is much more mature now, much more keen to take responsibility

I believe he's developed his physical attributes and commitment

You can see his desire to win

He plays to win the game.

"His talent is exceptional and he realises he can help us in every single game."

Arsenal now trail leaders Leicester by only two points and have opened up a four-point lead over City, who occupy third place.

"It was a vital game for us," Wenger said

"We are very happy because we showed all the ingredients you need in big games - good organisation, strong solidarity, high work-rate, moments of brilliance and moments when we needed to hang on.

"We had the chances to kill the game but didn't so when they came back to 2-1, we were a little bit under pressure

I believe it was very intense.

"There were moments when there were players on the ground on both sides of the pitch because of that total commitment.

"It's too early to say if we can win the league, but this win strengthens our belief

There's a real life and togetherness in the team, so let's take care of that."

Yaya Toure set up a tense finish in north London after lofting a ball past Petr Cech, but Arsenal would have been 5-0 up early in the second half had they not been so wasteful.

City boss Manuel Pellegrini claimed his side should not have lost.

But of course it was important to try to win," he said.

"I think we didn't deserve to lose I think we did better than Arsenal, we had more possession, more attempts, more shots at target

Unfortunately we made an important mistake for their second goal.

We demonstrated character by continuing to try and score when we were losing 2-0."