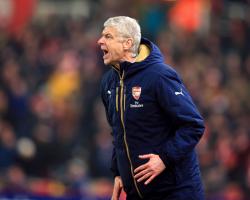 The 66-year-old said in November that he believes football has a doping problem after athletics had been rocked by drugs scandals.

Wenger's comments came to the attention of UKAD chief executive Nicole Sapstead, who said on Wednesday she would like to speak to the Frenchman about his insights into doping in football and he now says he is happy to oblige.

"I have more desire than time, but I'm more than happy to help if I can in clarifying things for people who want to fight against doping," he said

"I've said what I have to say

In football, in our job, we look like we want to tackle the problem now

For a long period it looks to me like we didn't.

We have to tackle doping and fight against it, you and me

I am not thinking I can do more than people responsible to do that, but if they need to talk to me I'm available

What is important is we all have to show we don't accept it."

Wenger went on to echo his previous sentiments that he does not believe anyone in the British game is guilty of doping.

I'm sure that not one club in England is trying to dope its players," he added.

"I'm 100 per cent convinced that nobody in England is trying to do that.

It's a health issue as well