Arsene Wenger happy to see Arsenal back on the winning trail 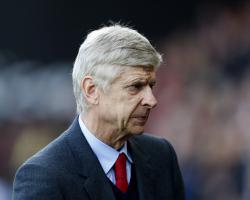 Unlike the in-form Foxes, Wenger's side have been stuttering of late and a 2-0 win at the Vitality Stadium on Sunday was their first in the league since January 2 - a run which has seen the Gunners drop from the summit to five points adrift of Leicester.

Arsenal had also gone almost five and a half hours without a Premier League goal before Mesut Ozil struck at the midway point of the first-half - with Alex Oxlade-Chamberlain adding doubling the visitors advantage just 88 seconds later.

The Cherries had some good chances of their own to get back into the contest but came up against an inspired Petr Cech in the Arsenal goal.

And Wenger, whose side welcome Claudio Ranieri's table-toppers to the Emirates Stadium next Sunday, said three points on the south coast were crucial as they look to keep a hold of Leicester's coat-tails.

"Yes, of course," the Frenchman replied when asked if the result was more important than the performance against the Cherries.

"For two reasons, one we haven't won for a while, we had four games without a win

When you play at the top, that's a long period, confidence drops a little bit.

"Also Leicester running away and us playing them next week, to make the game interesting, it was very important for us to win today."

The game at Arsenal is the third in a trilogy of tough tests for their title credentials but, having recorded wins over Liverpool and Manchester City in the last week, Wenger reckons they head to the Emirates as the favourites for the title..

"Look, in one week, Leicester has beaten Liverpool and Man City," he added.

"So that means suddenly they become the favourite in the league

That makes our game on Sunday a very big one.

"I think we needed to win the game

I do not want to be too dramatic with making statements

We had to win

"Leicester now is the favourite

We have a big game at home now against them, and I believe we have enough quality and nerves to deal with that."

Unlike Arsenal, Bournemouth headed into the game in the middle of a good spell which had seen them unbeaten in their last five games in all competitions.

Cherries boss Eddie Howe bemoaned a poor start but felt his players did well not to collapse after falling behind to two goals so close to one another.

"That is totally against what we wanted

I felt they dominated possession so credit to them

The disappointing thing for us was that our pressure and possession towards the end didn't convert into chances.

"Our response to conceding two goals quickly was good

We grew into the game but just couldn't make it count."