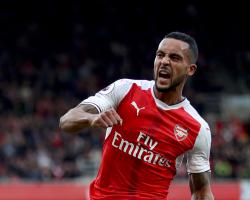 Walcott started just 15 league games and scored five goals - he has already matched that goal tally this term following his brace in Saturday's win over Swansea.

The 27-year-old has been in scintillating form and is now one of the first names on Wenger's team-sheet, something that could earn him a rest for Wednesday's Champions League visit of Ludogorets.

It could have been very different for player and club had Walcott been allowed to depart, with West Ham among the clubs who were heavily linked with a move for the former Southampton man.

But Wenger insists he did not think about selling Walcott, who has shone playing on the right wing in recent weeks.

Asked about any interest in the player over the summer, the Frenchman said: "Look, I haven't spoken to anybody because I was not ready to let him go

I always wanted to keep him.

That's what you want from him.

"I've felt that since he's played with more freedom, maybe he lets his feelings come out a bit more and is less calculating: 'Can I do that or can I not do that?'

"He plays with more freedom and more desire

I think he has a less restricted attitude and that shows you that he is a completely different player."

The Gunners have won their last six games in all competitions and face a Champions League double-header against Ludogorets, knowing two wins over the Bulgarian champions will all but secure safe passage into the knockout stages.

While Walcott could be handed a rest if Wenger decides to shuffle his pack, Francis Coquelin could come back into the side having recovered from the knee injury he suffered in the win over Chelsea last month.

It was originally feared the midfielder could be missing for three months but he made his return as a substitute against Swansea.

It took me a few weeks to get back to full fitness, but now I feel good," said Coquelin.

"When you make these kinds of tackles, and this happened before against West Brom, you are a bit scared

It was a similar tackle to then.

"The good thing was that I could run back onto the pitch afterwards, even if I couldn't stay on for long

The scan which followed was all positive so that was great news."

Couqelin's place in Arsenal's side has arguably never been under more pressure following the recent additions of Granit Xhaka and Mohamed Elneny.

But the Frenchman will be ready whenever he is called upon.

"Let's not forget we are Arsenal Football Club," he added.

"There's always going to be great quality in this squad

You have to be ready for a fight

It can only improve the whole squad."