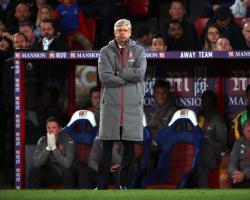 Wenger has been keeping counsel on whether he will sign a new contract for a number of weeks, but Monday night's 3-0 thumping at Crystal Palace piled further pressure on the Frenchman.

The decision whether he extends his stay at the Emirates Stadium will come from upstairs but Wenger is only focusing on the football.

He said: "What is happening at board level is not down to me

Theo Walcott claimed after the loss at Selhurst Park that Palace wanted it more than the Gunners, sharpening the focus on Wenger and his position.

They seem certain to miss out on Champions League football, but the boss says his relationship with the board and owner Stan Kroenke has not been affected.

He said: "I believe our relationship has always been the same and that has not changed."

Asked if anything had changed with regards to his future, Wenger replied: "Nothing."