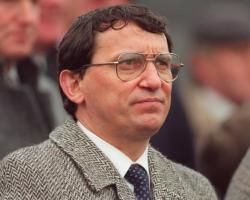 Taylor enjoyed great success in club management, particularly at Watford and Aston Villa, before taking charge of his country in 1990.

He died on Thursday morning of a suspected heart attack, aged 72.

English Football League clubs will stage a minute's applause ahead of all fixtures this weekend as a mark of respect, while Watford - who he led from the fourth tier to the first between 1977 and 1982, will hold a similar tribute at their Premier League clash against Middlesbrough at Vicarage Road

The Hornets will also wear black armbands for Saturday's fixture

Arsenal boss Wenger was one of many current managers to pay tribute to Taylor.

He said: "He was a very nice man, a very welcoming man and I always had big respect for him.

I had lunch once or twice with him, he had big passion and he was competent and absolutely focused on the game

"It was a very sad day for English football.

"He was an honest, educated man

Pat Rice had him as a manager and spoke to me about how passionate and interesting it was to work under him at Watford."

Taylor started out as a young player with Scunthorpe and also represented Grimsby and Lincoln before moving into management with the latter.

He took the club from the Fourth Division to runners-up in the top flight, qualifying for the UEFA Cup in 1983 and reaching the FA Cup final the following year.

He won promotion at the first attempt and two years after that, in 1990, they finished runners-up to Liverpool in the First Division.

That achievement was instrumental in securing him the England position

Years later, in 2002, he came out of managerial retirement for a second spell at Villa.

He also had a spell as manager at Wolves and later became a respected pundit with the BBC and BT Sport.

Two of Taylor's former clubs - Wolves and Aston Villa - meet in the Sky Bet Championship at Molineux on Saturday.

Villa boss Steve Bruce said: "I am, like everybody else, in total shock.

Of course there are people on the staff who worked with him for years.

"The one thing that shines out above anything is what a very, very good human being he was and a delight to work for.

"His record speaks for itself, not just here at Aston Villa but Wolves and what he did at Watford was quite remarkable

The tributes to him are only fitting.

"I'm sure there will be many more tributes, the football world is in a state of shock that we've lost someone like Graham so early because nobody expected it."

He said: "We have already many reasons why we need to win the game on Saturday.

"On top of this now we've got Graham Taylor which gives us an extra reason why we need to win the game against Middlesbrough."

He said: "It's a real shame when huge football people pass

I didn't know Graham personally, but our paths did cross on occasions

"I never spent a lot of time with him but clearly from his career and the impact he had on the game, he was clearly in love with the game.

"It's too soon for him to go to be honest

And when you hear stories from people who had closer relationships with him than I did the thing that comes across clearly is that he was well liked, loved and respected."