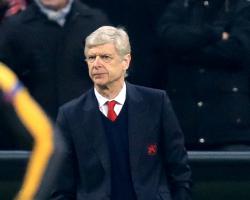 The Frenchman's long reign has come under intense scrutiny following a 5-1 Champions League reverse in Germany, while two defeats in three Premier League games have all-but ended hopes of a domestic title.

Now Wenger, who has revealed he will decide on his Arsenal future in March or April, takes his squad full of international talent to face Vanarama National League outfit Sutton at Gander Green Lane on Monday night.

Having already said he will field a strong side on Sutton's 3G artificial pitch, Wenger has also urged his players to react to the negativity which followed their humbling in Bavaria.

Asked how quickly players can shake off such a defeat, the 67-year-old said: "It will never be quick.

"You keep that with you for your whole life but overall, on the other hand, in life if we dwell too much on the past we forget to prepare for the future.

"Part of a successful life is to basically deal with disappointments and focus 100 per cent on what is in front of you and show you can deal with that."

Wenger has also refused to lay the blame at the feet of any one player, at least publicly, and reckons Arsenal can address their recent slide more easily if everyone at the club remain as one.

"When you have a heavy defeat like that it's difficult to come out on one individual," he added.

But overall for every single player it's always to try to get up to the next level and he is like everybody else.

"I would say it's more about character and being united because it's important you do not get in a blame culture and focus completely on being united to respond well."

Despite insisting he will name a "normal team" for the tie, Wenger may still make several alterations for the game in south London, with Laurent Koscielny struggling for fitness after suffering a thigh injury in Munich.

Meanwhile, the likes of Theo Walcott, Olivier Giroud, Danny Welbeck and Mohamed Elneny will all be hoping for a recall having been among the substitutes last time out.