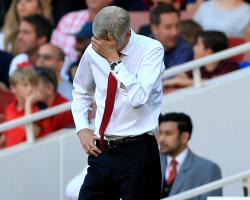 The Gunners boss has been widely criticised by Arsenal fans for a lack of activity in the transfer market, with the ÃÂ£30million signing of Granit Xhaka in May not followed up by further big-name acquisitions.

With centre-back pairing Gabriel and Per Mertesacker injured Wenger opted not to recall fellow defender Laurent Koscielny, as well as Olivier Giroud and Mesut Ozil, for Sunday's Premier League opener against Liverpool following their Euro 2016 exertions.

That led to the inexperienced partnership of Calum Chambers and Rob Holding starting the 4-3 defeat, while Wenger has been linked with a move for Valencia defender Shkodran Mustafi

With a perceived struggle to bring in fresh faces, former Arsenal favourite Thierry Henry believes the club are no longer a preferred destination in the Premier League.

Talking about Arsenal's recruitment, Henry told Sky Sports: "Does the player want to come to Arsenal? That's something we all need to take into consideration

So are we still the first choice in England? I don't think so."

But Wenger feels he can still tempt players to sign for a club which have not won the Premier League in 12 years.

"We have plenty of players who want to join us and I would say that even with the players who left, 99.5 per cent of the players have asked to come back even when they left.

"He (Thierry) is one of them

It's not so difficult to attract players."

One player Wenger failed to lure to the Emirates Stadium was Leicester forward Jamie Vardy, who rejected the overtures to sign a fresh deal with the champions.

"I don't think he has something special against us, I don't see why he would."

Wenger also hit back at long-standing criticism that he is unwilling to spend the money Arsenal have in reserve.

"What I fight against is to think that the only way in football to deal, is to buy

"We had great success in the last 20 years in improving our structures and the main thing is based on a transfer policy."

The 66-year-old admitted he may be tempted to take the gamble of reintroducing Koscielny into the side which travels to the King Power Stadium - while revealing both Aaron Ramsey and Alex Iwobi face three weeks out after picking up knocks against Liverpool.

"It's a bit early, yes, but I have three players who have not played here for two-and-a-half months

I will have to take a gamble maybe, but I will still have 48 hours to decide that," he said.

"If I have to take a gamble on one, it's certainly on him (Koscielny)."

Arsenal travel to the East Midlands having beaten Leicester home and away last season, but they still finished 10 points adrift of the eventual champions, and Wenger believes Claudio Ranieri's surprise winners can mix it at the top of the table again this year.

"The challenge for them is to do well again and to show that their last year was not a one off," he said.

"They need to be capable of challenging and will need to be to show if they can be considered as one of the top teams in England.

Asked if Leicester could finish in the top four, Wenger replied: "Why not? At the moment I am not concerned about that too much, I am more focused on us responding well to Sunday.

"Despite the game on Sunday, there are many positive aspects in our game that we want to keep for our next game against Leicester."