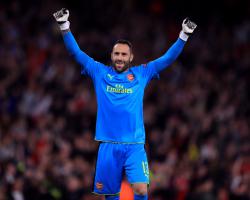 Cech, the only previous winner of the competition in the Arsenal ranks, will be warming the bench at the Allianz Arena - the venue for his Champions League success with Chelsea - as Wenger sticks by Colombia international Ospina.

The 28-year-old played all six of the Gunners' group matches as they finished unbeaten to advance in first place.

Wenger had the same rotation policy last season but drafted Cech back in for this stage as his side were knocked out by Barcelona.

In fact, Arsenal have been eliminated at the round of 16 for the past six seasons but, despite some question marks over Ospina after a couple of poor displays last year, Wenger has backed the Gunners stopper in a big way.

"I have nothing to hide there, it will be Ospina because of the quality of his performances," the Arsenal boss replied when asked about which goalkeeper would start the game.

"We are in the last 16 and finished top of the group, if you analyse his performances in every single game we are where we are because of his great performances."

Wenger also suggested Mesut Ozil would start on Wednesday after he said the German World Cup winner was lacking confidence in recent games.

Ozil has not scored since December 10 and has been a peripheral figure for many of Arsenal's last fixtures, including the two recent defeats to Watford and Chelsea.

"I will pick the team on Wednesday morning," he said when asked if Ozil would play.

"I have no doubt that we play in Germany and Ozil is highly focused to have a good performance.

So it is an important match."

The move is made all the more bold by the fact Arsenal's form domestically means they are all-but out of the Premier League title race after two defeats in their last three games.

Because of that run, Wenger has again seen a minority of fans calling for him to leave, with his current deal expiring at the end of the season.

But Bayern boss Carlo Ancelotti, who came up against Wenger while manager of Chelsea, believes the Frenchman should now be immune to any criticism.

"Wenger has the experience to know that in our job it is normal to be criticised," said the Italian.

"For this reason he has no problems

He built a strong identity in this club, he built a really good style of football

I have a lot of respect for the job he has done at Arsenal."