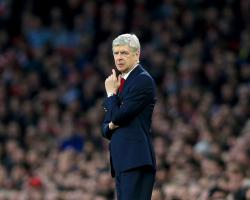 The 36-year-old revealed on Sunday that he expects to leave the Blues in the summer having been told he will not be offered a new contract at the club.

The west London club issued their own statement on Sunday night in which they said a contract extension could yet be offered.

Wenger spoke warmly about the former England captain but said he would not follow up the signing of goalkeeper Petr Cech from Chelsea by going after Terry.

The Chelsea skipper has also said that he would not consider joining another English club, with the United States or China more likely destinations.

Asked if he had any interest in signing Terry, Wenger said: "No, because he is at the end of his career and he has spent his career at Chelsea

If he wants to play longer, I am sure he will play for Chelsea

I always consider that I'm paid for my commitment to the club and I'm well paid so once it is over the club owes me nothing and I have to get on with my life and find another way.

"I do not expect a reward because it is part of my contract."

"He was not only a great player, he certainly still is, but he was also a great coach on the pitch," he added.

"I saw him here once at London Colney playing with the under-21s and the way he coached the team as a player was absolutely marvellous.

"He was a real leader and he had a great career as well, let's not forget that

The guys who last such a long time have something special.

"He was the symbol of cohesion inside Chelsea's club because him, (Frank) Lampard, (Didier) Drogba and Cech were the players who carried the club's values for long periods

When you lose players like that you're always in danger.

"I see a coaching career in his future, certainly

He will remain in football, I'm sure."

While Terry's surprise announcement was not a plea to be snapped up in the closing hours of the transfer window, it has been one of the biggest stories in what has been a quiet January in terms of signings.

Most of the deals have been concluded by those teams looking to secure their top-flight status, with Newcastle, Norwich and Bournemouth among the biggest spenders

Wenger said at the start of January that he was expecting plenty of money to be spent but there has been a lack of major deals.

Speaking at his press conference ahead of Tuesday's match at home to Southampton, the Frenchman said: "The whole period was much quieter than I expected

I thought there would be much more activity but finally it has been quite and the fact we are all here means it is still quiet."

While not completely ruling out any further additions to his ranks, Wenger's tongue-in-cheek response to making a late deal suggests he knows no incomings are likely.

"100 per cent is difficult to say, but 99 per cent sure, yes," he said of any deadline day recruitment.

"A miracle can always happen, someone can knock on your door and if (Lionel) Messi knocks on my door at 10 to six tonight, I will not say 'please go back to Barcelona!'"

There could yet be a couple of temporary departures as Wenger is hopeful of loaning out both Serge Gnabry and Mathieu Debuchy before the window closes on Monday evening.