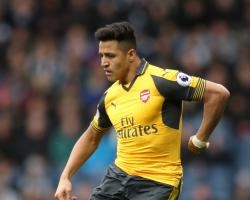 Sanchez, who is yet to sign a new deal with the Gunners, was reported as telling South American media this week that he is happy in London and keen to see out his Arsenal contract which expires next year.

Wenger's response to the latest transfer talk, though, was a lighthearted one

Asked how he interpreted what Sanchez had said, he said: "In a very positive way

There's only one team in London, so he is happy."

I think you have to be cautious when people give interviews in their home countries because the interpretation is not always exactly what they wanted to say.

"But I don't see anything negative (in Sanchez's comments)

He said he wants to win the championship, that's what everybody wants and I can understand that completely."

Sanchez, who is expected to be fit for this weekend's visit of Manchester City after playing twice for Chile during the international break, has yet to agree a new deal despite his current contract expiring in 15 months.

Both he and team-mate Mesut Ozil are reportedly holding out for parity with the Premier League's top earners.

Asked about Arsenal losing their top stars in the past, Wenger said: "That is true that it happened before when we were in positions where we had to sell financially our best players

That's not the case anymore.

"Look, he has one and a half years left on his contract

I don't think it's an immediate concern to Arsenal Football Club.

I personally believe that both of them want to stay and I hope that the club will find an agreement with them."

He told the Sun: "This is typical of the lack of leadership and direction at Arsenal

No one is making any decisions

Who's running the club? Arsene is, obviously

He should be forced to say what he's going to do

"Somebody upstairs should be telling him, 'Either you're staying or you're going

You must make an announcement'.

"The people above Arsene, if there is anyone, need to sort everything out

T his wouldn't happen at any other club, but it is at Arsenal because the board are so happy and so relaxed

The club's just a massive cash cow to those people."