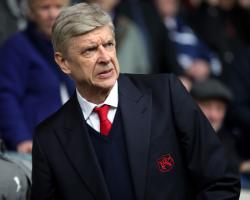 His current contract expires in the summer.

It is expected that the announcement would come soon after the resumption of club football following the March international break, but Wenger had no developments to report at his press conference on Thursday morning to preview Sunday's match against Manchester City.

Asked if he had anything to say about his future, the 67-year-old said: "Not today, but I am very clear in my mind

It is a subject that is not sorted completely."

Wenger added: "Do I stay two months or two years? My commitment will be exactly the same."

The Frenchman has been in charge of the Gunners since 1996 but a section of the club's supporters have been calling on him to go, with their last Premier League title coming in 2004

They have been eliminated from the Champions League at the last 16 stage for the last seven years in a row.

The club went nine years without winning a piece of major silverware, ending the drought with victory over Hull in the 2014 FA Cup final

They are sixth in the Premier League table, six points behind fourth-placed Liverpool in the final Champions League qualifying slot and 19 points behind leaders Chelsea.

The uncertainty over his own position has also led to speculation regarding the future of a number of Arsenal's star players, including Alexis Sanchez and Mesut Ozil.

Wenger's response to the latest speculation was a light-hearted one

Asked how he interpreted what Sanchez had said, he replied: "In a very positive way

There's only one team in London, so he is happy."

"But I don't see anything negative (in Sanchez's comments)

He said he wants to win the championship, that's what everybody wants and I can understand that completely."

It was put to Wenger that Sanchez could join Chelsea, with the comparison made to the period when a number of Arsenal stars joined Manchester City

"It is true that it happened before when we were in the position financially where we had to sell our best players, and that's not the case any more," he said

"He has one and a half year's contract so I don't think it is an immediate concern for Arsenal Football Club."