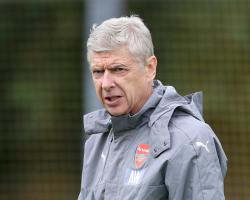 The Gunners boss reached two decades at the helm on Saturday and his list of what he still wants to achieve includes winning "absolutely everything".

Having lifted three Premier League titles and a record-equalling six FA Cups during his reign, Wenger is looking to add more to that this season.

His contract expires at the end of the season so there is still the possibility it could be his last campaign at the Emirates Stadium, especially since Football Association chief executive Martin Glenn said Wenger would "fit the criteria perfectly" of the next England manager.

The Frenchman takes his side to Burnley on Sunday looking for a fifth league win in succession, with Arsenal unbeaten in all competitions since an opening weekend defeat to Liverpool.

And Wenger, 66, is liking what he sees in terms of progression within his current squad

Alexis Sanchez, Theo Walcott, Mesut Ozil and Santi Cazorla have shone going forward, while Laurent Koscielny and Shkodran Mustafi have developed a quick understanding in defence following the latter's arrival in the summer.

"It looks like we have moved forward with the quality of our game," he said.

"We've found a good balance between attacking and defending

That should keep the focus very high.

"I like them because I think they are focused

They have a good togetherness, they have a great concentration level.

"How far can we go? We don't really know

We are at a bit of a turning point at the moment."

Wenger insisted winning a trophy was not a prerequisite in terms of ushering in his departure from Arsenal and he did concede taking a fourth Premier League title may prove more difficult than ever, even if last weekend's 3-0 hammering of Chelsea showed how good his team can be.

Asked what he still had left to achieve after 20 years in charge at Arsenal, he said: "I want to win absolutely everything and play the perfect game in every single game, that is my dream - g et people to enjoy what they see, and the players to enjoy what they do

"I believe we are a bit more mature

The squad is strong

Maybe the Premier League is more difficult than ever this year

"You have many big teams

The result against Chelsea helped us but we have to show we can be consistent and do well in the other big games."

Asked about the importance of winning a trophy in order to leave on a high, as Sir Alex Ferguson did by winning the league to end his 26-year reign as Manchester United boss, Wenger replied: "I am not obsessed by that

Would Ferguson have not have gone out on a high after the history?

"Time makes a difference with what the guy has done

While the club were busy toasting Wenger's landmark achievement, they also confirmed a new signing to their academy as 17-year-old goalkeeper Alex Crean joined as a young professional from Celtic, having previously been part of the youth set-up at Crystal Palace.

The Scotland youth international may be some way from breaking into the first-team picture at Arsenal, but with Wenger as hungry as ever for success, he could still be at the helm when Crean's time comes.