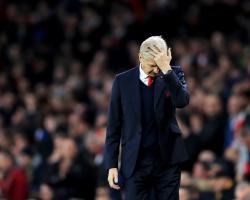 The Gunners were thrashed 5-1 in the opening leg of their last-16 tie, leading to stinging criticism of Wenger and his players and renewed calls for the Frenchman to leave when his contract expires at the end of the campaign.

The 67-year-old will speak at 0900 at a press conference designated as a chance to preview Monday's FA Cup fifth-round clash at non-league Sutton.

But in reality, Wenger is likely to be grilled on his plans for the future, even if he has previously insisted he will not make a decision on whether to extend his 20-year reign until the season's conclusion.

Given their mammoth task of having to beat Bayern 4-0 in March's home leg to advance in the Champions League and the fact that two defeats in three Premier League games has seen Arsenal slip out of contention for the title, the FA Cup tie is now massive for Wenger and the club.

It would be one of the biggest upsets in the history of the competition if the 12-time winners were knocked out by the Vanarama National League outfit.

But all is not well at the Emirates Stadium, with Wenger under pressure and his players wilting when he needs them most.

None of the squad spoke to the media as they trudged onto the team coach leaving the Allianz Arena, with the likes of Mesut Ozil and Granit Xhaka among those widely condemned for their displays.

It is the latest in a run of recent games where club-record signing Ozil has stood out for the wrong reasons as he is so often of the periphery of the match.

But he has been defended by his agent, Dr Erkut Sogut, who claims the Germany international has been made a "scapegoat" for all of Arsenal's recent ills.

"But Mesut feels people are not focusing on his performance; they are using him as a scapegoat for the team after bad results."

Was he the reason that Arsenal conceded five goals?

"It started before the match, throughout the week leading up to the game

People started discussing: 'Should he play? Should he be dropped?'.

This is not right

You win as a team and you lose as a team."

Wenger is likely to be asked about Ozil's performances and whether the German World Cup winner will feature at Sutton, but it will be the questions over his own long-term future that are expected to dominate his news conference.