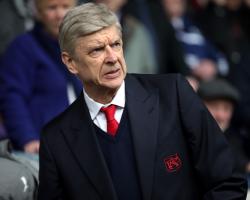 Out of contract at the end of the season, Wenger is reported to be ready to sign a new two-year deal with the Gunners after revealing over the weekend he had made up his mind regarding his future and that an announcement would be made "very soon".

It is understood that, contrary to reports from German newspaper Bild, Arsenal have not made an official approach to Borussia Dortmund coach Thomas Tuchel and seem resolved to stand by Wenger.

The issue is likely to split the opinion of fans, with renewed calls from some sections of the fanbase to end his 21-year stay at Arsenal at the end of the campaign following a 3-1 loss at West Brom.

Anti-Wenger fans flew a plane over The Hawthorns trailing a banner saying: ''No contract Wenger out'' although another later proclaimed "In Arsene We Trust #RESPECTAW"

A 10-2 aggregate defeat against Bayern Munich in the Champions League badly damaged Wenger's standing while the setback on Saturday was their fourth loss in five top-flight matches and leaves them sixth in the table.

Sitting six points adrift of fourth-placed Liverpool - albeit with two matches in hand - a 20th successive season of Champions League football in 2017-18 hangs in the balance.

But Wenger said after defeat to the Baggies that he does not think qualifying for Europe's elite club competition is the be-all and end-all for the club.

It's more, it's not that,'' said the Arsenal boss.

''I take a bigger perspective than that

It's not the last result that will decide what I will do.

That was for a long time the case, but not today

''Of course, on the sporting front it would be a blow, but financially the Champions League does not have the impact any more that it had five or six years ago because of the influx of the television money (to the Premier League).''

Asked whether some supporters' actions in urging him to quit were disrespectful towards a manager who has brought nine major trophies to the club, including three Premier League titles, Wenger said: ''I don't know.

"I don't want to judge

I'm judged enough and I'm not a judge so I can't answer.

''Everybody in life is responsible for his own behaviour

I'm responsible for my own behaviour

I don't judge other people.

As long as I am at the club, whether that is for two more years, 10 more years or four more months, that will not be different

As for all the rest, everybody has to look at themselves.''