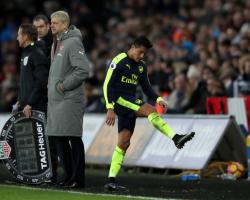 Sanchez had scored Arsenal's fourth goal - his 16th of the season - before being withdrawn 11 minutes from time with the Gunners moving in to the top three on goal difference.

The Chilean forward - who showed his frustration at the final whistle of Arsenal's last league game, a 3-3 draw at Bournemouth - responded to his substitution by kicking his gloves on the touchline.

"All the players are frustrated when they come off, some show it, some not," Arsenal manager Wenger said.

"I'm long enough in the job to know that

I just make the decision I feel is right, that's it.

"He (Sanchez) is a good guy who gives a lot and who always wants to do well for the team.

In every culture it's different.

"Some South Americans are a bit different to Europeans

"I don't look at that

I look at how well the players do that come on, how comfortable they are, because Danny Welbeck has not played for two years.

"That's much more important for me than an individual response

That is vital when a player 25 years of age, who is a regular in the national team, comes on, you have an opportunity to give him game time."

Sanchez shone in the second half as Arsenal, 1-0 up at the break through Olivier Giroud's fifth goal in as many matches, turned on the style.

Two deflected Alex Iwobi shots, which were credited as own goals to Jack Cork and Kyle Naughton, and a neat Sanchez volley secured Arsenal's first league double over Swansea since the 1982-83 season.

"Alexis was very sharp," said Wenger, who confirmed that Arsenal would assess an ankle injury to Giroud.

"I rested him for two weeks, gave him a little breather

I think he benefited from that

I gave him another rest today (at the end), so he will benefit from that as well.

When you look at the numbers, he's been involved in about 25 goals in our team

With Hull beating Bournemouth, Swansea dropped to the foot of the table and their next five fixtures include games against Liverpool, Manchester City and Chelsea

But Swansea head coach Paul Clement, who was in charge of a Premier League game for the first time, insists the manner of the Arsenal defeat has not changed his view on the challenge ahead.

"Everyone knows the task at hand is a very hard one but we're all up for it," said Clement, who confirmed the signings of Norwich defender Martin Olsson and Tottenham midfielder Tom Carroll are waiting on medicals and paperwork.

"There are games we are not necessarily expected to win

That's maybe one today, though we would have wanted the scoreline to be much closer.

"There are games we will have to win

We have to make sure when those games come around we are on top form."

Asked about a penalty appeal at 1-0 down on the stroke of half-time, in which midfielder Ki Sung-yueng was booked after tangling with Laurent Koscielny, Clement said: "I'm surprised - I thought it was given

"When I spoke to Ki at half-time, he said, 'It was a penalty - there was contact on me'

"I got to look back at it

The referee doesn't get that opportunity, but I saw the video after the game from all the different angles

I saw the reaction of Koscielny and it's a penalty."