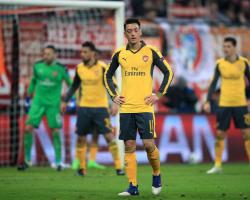 The Gunners have once again struggled against their main rivals this season and are now in a fight to maintain their record of always finishing in the Premier League's top four in all of Wenger's full seasons at the helm.

The 67-year-old insists he is still undecided over whether to end his 20-year reign as boss at the end of the current season, with supporter unrest growing in recent weeks.

Arsenal were surprisingly beaten at home by Watford before slipping to a 3-1 loss at Chelsea and a 5-1 thrashing in their Champions League tie away to Bayern Munich.

That saw them slip off the pace in the title race and leaves them staring at a seventh successive round of 16 exit in Europe.

Having started the season well, recovering from a home reverse to Liverpool to go 19 games undefeated in all competitions, back-to-back 2-1 losses at Everton and Manchester City halted their title charge - and now Wenger wants a reaction on another big away-day.

"They owe themselves a performance," he said.

"They are quality players and I think on the day (at Bayern) it all went against us because we were 1-1 at half time and in the second half everything went against us.

"We lost Laurent Koscielny quickly and then quickly conceded without having adjusted, we lost three goals - (in minutes) 53, 56 and 63

After that it was mentally very difficult.

"We responded at Sutton (a 2-0 FA Cup win), that was quite a tricky game and we want to respond again tomorrow

We have an opportunity against Bayern after that to show we can cause them problems."

While turning the tide against the Bundesliga giants looks an insurmountable task, Wenger will be keen to address a wretched run against the current top six in the Premier League.

He has guided Arsenal to just three wins in their last 23 away games at Chelsea, Tottenham, Liverpool, Manchester City and Manchester United and believes victory at Anfield can help alleviate any psychological barrier that has developed as a result of that run.

"It is even more important because we have not done well recently in these kind of games," he said.

"For us, this kind of game like Liverpool is of course an opportunity that we want to take

We have to go and take it and not wait for the result.

That we go to just start on a positive attitude - for the rest of the season, of course it will have vital consequences."

Wenger, who side are currently 13 points adrift of leaders Chelsea having played a game less, is keen to focus more on beating Liverpool than fantasising about a memorable run to the title.

"We have to focus on our next game," he added.

"We have a game in hand, things can change quickly

To do a thing like that, you need exceptional rhythm in your results and as well Chelsea to fade.

"At the moment I think it's more important that we focus on winning our games and focus on our next game rather than dreaming about coming back to Chelsea.

Anfield is a special place where the fans are behind their team, where their team plays at a good pace.

"For us, after a little break, it's important to switch on quickly

We have seen that's not easy - Liverpool showed that against Leicester

After a break, it's important that you are ready from the start on again

You lose a little bit the rhythm of the competition and for us it's vital to start strongly at Liverpool."

Arsenal's chances will be boosted by a return to fitness for both Laurent Koscielny and Aaron Ramsey, while Danny Welbeck is now in contention to start having been eased back into the first-team picture following a second serious knee injury.