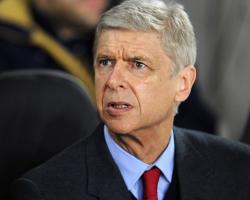 The Gunners will go into the new year at the Premier League summit on goal difference after Leicester and Manchester City played out a goalless draw on Tuesday night.

In the past, being top at the turn of the year has often been followed by championship celebrations come May - but not for Arsenal.

Wenger's side have been top three times in the previous 14 years before this one but in none of those seasons have they gone on to lift the trophy and s ince 2005, only Arsenal and Liverpool have failed to win the league from top spot on January 1

His unbeaten 'Invincibles' were second when 2004 was welcomed in but they overhauled Manchester United to win the crown - and this time round Wenger has backed his squad to show they have the quality to seal a first title in 12 years.

"I believe that we are mature enough and that we have the requested quality to fight and compete," he said.

"The most important thing is to feel, at the end of the season, that we have given absolutely everything to be successful.

"After that, if somebody has been better than us, we will accept it, but we want to fight to show that we have a chance.

That is Arsenal Football Club

It is not the date (new year's day) that is decided you win the league.

"It shows you that we have a good chance as the statistics show you that eight of the past 11 years the team who was top on new year's day won it."

Wenger dismissed questions about the mentality of his teams over the years leading to them giving away their lead in the run-in when others such as Manchester United, Chelsea and Manchester City have turned the position into titles.

"You question our mentality, I don't," he said.

You cannot rule us out after 19 games

We have chance and we want to fight for it.

But Man United had huge potential over the years.

"We played Liverpool at a time when they had Xabi Alonso, Steven Gerrard and Javier Mascherano in the middle of the park

Look at what all these players have won since

They had fantastic teams.

"Manchester United had (Cristiano) Ronaldo, Wayne Rooney and Ryan Giggs over the period and you see what these players have done