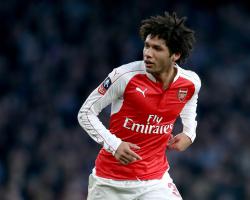 Elneny, who arrived from Basle in a ÃÂ£5million deal earlier this month, made his Arsenal debut in their 2-1 FA Cup fourth-round victory over Burnley on Saturday

The Egyptian international completed the full 90 minutes for the Gunners, and while Wenger was pleased with his overall contribution, the Frenchman feels his new signing has to improve on the physical side of his game

"I felt he started a bit cautious and played a bit secure," said Wenger of the 23-year-old midfielder

"But he became more adventurous, had some good shots on goal, and his mobility and his workrate was exceptional

"He needs to adjust to the power of the game in the Premier League, but this was a good welcome today and certainly he has learned a lot

"It will take him some time to adjust to the power side of our game here but his intelligence, mobility and the technical level are good."

Alexis Sanchez, who scored the decisive goal in the second half, made his first start since November 29, while Francis Coquelin also returned after a lengthy injury lay-off

Tomas Rosicky came off the bench to make his first appearance of the season, but it was reported on Sunday that the injury-prone midfielder faces a month on the sidelines after suffering a thigh injury on his comeback

For Wenger, the Frenchman is bidding to become the most successful manager in the history of the FA Cup

"First of all we have only passed two rounds so there is a long way to go when you look at everybody still in there," said Wenger of his side's chances of winning the famous tournament of a third successive time.

We are still in three competitions so we try to get a team out that has a chance to pass the round."

"We came here today and gave it a real go and showed what we're all about," Vokes said

"In the way we lined up we took the game to them and I think it was a great performance.

We haven't disgraced ourselves at all, we put in a great performance and that's the kind of run we're on and the confidence that's in the team at the minute."