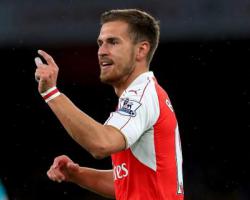 Ramsey appeared to have fired Arsenal into the lead during the first half of the Emirates Stadium clash, but his goal was wrongly chalked off

The Wales international was flagged offside, but television replays proved his goal should have stood

Following the 0-0 stalemate, Ramsey said it was time for football to turn to technology, and Wenger, speaking ahead of his side's trip to Newcastle on Saturday echoed his midfielder's sentiments

Wenger said: "Do you think we will play football in 50 years without that [technology]? I don't believe so

I believe it will happen on the demand of the referee."

Asked when the technology may be introduced, Wenger said: "The sooner the better

Tomorrow morning you would have my signature - not because we were punished for that goal against Liverpool - but because you want justice and the right decisions to be made."

Optimism had been high heading into the new Premier League campaign, but a victory at Crystal Palace has been sandwiched with a defeat against West Ham on the opening day and their draw with Liverpool on Monday night

"We have not had the ideal start and we are conscious of that but we want to play 60 games in the season," Wenger added

"We have played three games now and we have lost one that we should not have lost, but we have to be conscious that the season is not decided yet

"Maybe we are not firing on all cylinders at the moment

Not everybody is ready physically

Certainly at the moment we want it so much at home that we're trying to force it a little bit."

Wenger could be without his first-choice central defensive partnership on Saturday with Laurent Koscielny and Per Mertesacker both doubts for the St James' Park trip.

A decision on whether the pair will travel is expected to be made later on Friday.