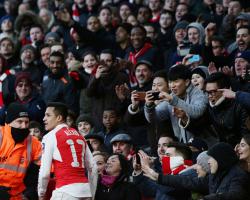 Sanchez, making his first start for the Gunners since November 29, set up Calum Chambers for the opening goal of the game before getting on the scoresheet in the second half of a 2-1 success.

The Chile international was given a standing ovation by the Arsenal faithful after he was substituted with 11 minutes remaining following an impressive display.

And Wenger, who is bidding to win the FA Cup for a record seventh time as a manager, believes the Gunners will benefit from Sanchez's enforced spell on the sidelines.

"He has had a long rest now," said Wenger of the 27-year-old forward who was an ever-present for Arsenal until he sustained a hamstring injury in their 1-1 draw at Norwich.

"It is true that when he got injured you could see signs of fatigue, and two months' rest is a good winter break.

He was there physically but we had some worries about his muscle, but he came through well and you could see that physically he is ready."

Francis Coquelin made his first appearance for Arsenal since November after an injury lay-off while new signing Mohamed Elneny was handed his debut.

In total, Wenger made nine changes to the side which suffered a disappointing 1-0 defeat against Chelsea in the Barclays Premier League here last Sunday.

Chambers scored after 19 minutes with a fine finish following a neat through-ball from Sanchez before Burnley stunned the hosts when Sam Vokes equalised.

"At the start it looked like it would be easy because we had a lot of the ball and good opportunities around the box," Wenger added.

I think we were shocked and they gained belief.

"I saw them in their win against Derby and I could see that they were very efficient, a strong team, no weakness, and they have shown that today.

"In the second half I don't think they created a lot, but we managed to win the game and we looked in control in the end."

Burnley, third in the Championship after they were relegated from the top flight last season, turned in a strong performance but manager Sean Dyche was disappointed to end up on the losing side.

"It does add to the belief system for the individuals and the team when you do come to these places and you do deliver strong performances," Dyche said.

"There were a lot of pleasing things, but you come to win - no matter where you are - so that is the ultimate disappointment that we didn't get anything from the game."