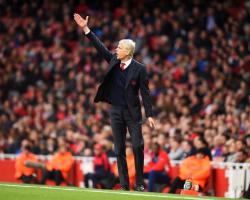 The Hammers had seen minor outbreaks of unrest at their new London Stadium home early in the season and they escalated during Wednesday night's 2-1 EFL Cup win over Chelsea.

Seven arrests were made as opposing fans clashed, and West Ham have since warned they will ban up to 200 supporters if trouble-makers can be identified.

Wenger played down the incident but, as an advocate of safe standing, believes it could damage the prospect of fans being allowed to stand for games.

All-seater stadia became the standard in the wake of the 1989 Hillsborough disaster and the subsequent Taylor Report.

Asked about the trouble that marred the all-London cup clash, Wenger said: "I'm surprised even more than disappointed, because West Ham is usually a very strong fan base.

"They are very motivated and as well we are not used, in England, to face these kind of problems any more

Personally I am in favour of the resurgence of standing opportunities behind the goals.

"It is not a very good advert to come back to standing opportunities for people in the stands so I am surprised and hopefully West Ham will get rid of the problem very quickly.

You cannot say that one minor incident - I heard about 200 people - is a general problem in the country."

Celtic have introduced safe standing at Celtic Park for a reported cost of ÃÂ£500,000 and have encountered no problems to date.

Wenger wants to see it brought in south of the border to help create a better atmosphere at Premier League games.

Asked whether the kind of scenes at West Ham damage the argument for safe standing, he replied: "Yes, of course.

"It gives an argument, especially to people who are against it

I feel the closer you are to the positions of the players, the more passionate you are about it.

"As well because it would allow lower prices because you could get more spectators inside the stadiums, and maybe a more passionate atmosphere."

Mark Field, vice-chairman of the all-party parliamentary football group and Conservative MP for the Cities of London and Westminster, has called on West Ham supporters to be handed a stadium ban in the event of any repeat

"There is nothing more dull than that," Wenger said

"I prefer not to play than playing games behind closed doors."

Wenger takes his Arsenal side to West Ham on December 3

When asked if he had any concerns over the game, he said: "No, honestly no."