Arsene Wenger will not hand-pick his Arsenal successor 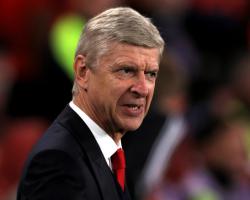 The Frenchman, who turns 67 next week, celebrated 20 years in charge of the Gunners earlier this month but it is unclear how much longer he will remain the role.

Wenger's contract runs out in the summer when either manager or club could decide it is time for a change.

The England manager's position remains a possibility for Wenger, who admitted he could be tempted by the role "if I am free one day", but he could also sign a new deal to further extend his stay in north London.

Wenger is clear on one thing about his departure, he will not hand-pick his replacement, although he may offer his opinion if asked by the powers that be at the Emirates Stadium.

"I think it is very important in the club that everybody does what he is paid for," he said in an interview with beIN Sports.

The board's responsibility will be to choose the next manager so that is not my job.

"If they ask my opinion, I will give it in an honest way, but it will not be me to choose the next manager

I'm not in their position, I am in my position.

"The love story I have with the club is linked as well with the fact the board has always shown faith in me and I'm very grateful for that.

Wenger's passion shows no sign of abating as he goes in search for a first Premier League crown since his 'Invincibles' of 2003/04 won the title without losing.

He welcomes Swansea on Saturday looking for a sixth-straight victory in all competitions and he remains confident in his ability to continually improve his current squad.

"I think I'm moving the club forward, and the way it is managed forward, I'm quite confident on that," he added.

"That will be a decisive factor, have I done well? Have we achieved what I wanted to achieve with this team? That will be at stake.

"Me, purely as a manager, I like to do what I do

Will I do something else one day, I don't know

As long as I have that I don't want to stop my career, even if I don't think I will manage somewhere else maybe."

Any title hopes Arsenal had last season were damaged with a defeat in the corresponding fixture back in March, when relegation-threatened Swansea won 2-1 at the Emirates.

Wenger wants his squad to show on Saturday just how far they have come since then and prove they are bona fide title contenders this time around.

"Last year we had a very negative experience with Swansea who killed our opportunity to win the Premier League," he said.

"We have a good opportunity to show that we have learned from that and that we are capable of dealing with these kinds of opponents.

"That's what is at stake for us

We have to show that we can deal with the kinds of fixtures where we are the favourites.

"We were not always capable of doing that last season and we want to show that we have moved forward.