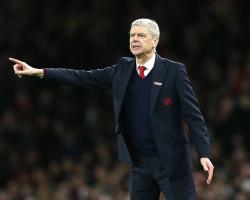 The Gunners were beaten 3-2 in Staffordshire last December and Wenger and his players came in for criticism from angry supporters as they boarded their train back to London.

This season there is more goodwill from fans as Arsenal sit top of the Barclays Premier League despite conceding a last-gasp equaliser in a 3-3 draw at Liverpool on Wednesday.

And, despite his belief that there could an escalation in such occurrences in the future, Wenger has no plans to change the way the team travel to Stoke - where Arsenal have won just once in the league in the last 25 years.

When asked if Arsenal would again travel by train, Wenger replied: "Yes.

"I took it (the abuse from supporters) as people who were upset because we lost a game and didn't take it personally.

I didn't take it (personally).

"I was sad and upset more by the result than by the individual reactions of people, which I can understand

When you love a club, you want the results to be positive."

Wenger reckons supporters venting their frustrations could become more of an issue having witnessed similar scenes in his native France in recent weeks.

That problem I see it, observing in Europe," he said.

"I see in France especially now in the last two or three weeks, many problems occurred with disappointing results on that front.

"It exists a lot in France, with enchanted people coming out and having an aggressive behaviour

You see it in many countries now, more and more."

Once his squad has arrived in Stoke, Wenger will have to make two key decisions over team selection.

Midfielder Mohamed Elneny, signed from Basle on Thursday, is in contention to make his debut but Wenger is undecided on whether to throw in the 23-year-old straight into his team.

"He is available for selection, I haven't decided (if he will play) yet," the Arsenal boss said when asked about Elneny's position.

"I have to see how everyone has recovered

Apparently we have no injuries form the Liverpool game, so he is a possibility to be in the squad for Sunday."

The other major call is whether to bring Alexis Sanchez back into the fold as the Chile forward is fit following a niggling hamstring injury.

Sanchez has been missing since a draw at Norwich in November and, with Joel Campbell flourishing in his absence, Wenger is in no hurry to rush the former Barcelona man back - admitting it would be a risk to play him at Stoke.

"The other question mark is about Alexis," he added.

"He has two decisive days - today and tomorrow

he is fit, has worked very hard and the decision we have to take is whether to take a gamble or not on his injury."