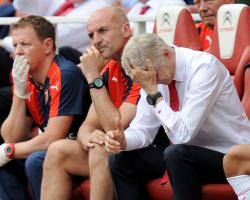 Another season, another transfer window where Arsene Wenger and co

appear to be in hibernation

Lots of speculation on who is to be bought, lots of big headlines concerning strikers, midfielders and even the occasional defenders at yet the reality is, one game into the season the only player acquired is a player deemed not good enough for Chelsea's first team, and yet when asked about new recruits it appears the Frenchman doesn't care.

It's not good enough

You can praise the players you have until you're blue in the face but the fact of the matter is, especially after such a result as the West Ham weekend woe-fest, it has to be acknowledged that they are simply not good enough to perform week in week out to a standard which enables Arsenal Football Club to challenge for the Premier League title

In 10 years at the club, Walcott has not had a respectable season in truth, having only once made it past the 10 league goals mark, and yet his new deal has purportedly placed him in the Top Earners category

Why? His inconsistency is a liability not an asset

It's possible perhaps Wenger truly cannot see the negative and suffers from cognitive dissonance, accordingly trying to balance the far too often poor results with other factors, such as injuries, preparation, fatigue etc

It can't possibly be the players who are at fault because, that would mean Arsene himself is at fault for having picked them, and in the case of Walcott, stuck with him for all this time

Diaby syndrome, this condition could be named, albeit slightly cruelly, but nevertheless accurately

It's only logical that if you keep your head buried in sand for long enough that your eyes will not remain unscathed.

Ridiculously high ticket prices, combined with the knowledge that there is money.

in the bank for players, and yet a game into the season no-one has arrived

Arsenal were outplayed by a mid-table team, registering barely a shot on target in the first 80 minutes, and were tactically so inept that were it a chess game instead of football I doubt 10 moves each would've been completed

It's said that Albert Einstein once spoke these words : "Insanity: doing the same thing over and over again and expecting different results." Arsenal and Arsene Wenger might want to take heed of this, before the transfer window slams shut, and another season which looked like it could be so promising turns into an FA cup chase and an "also ran" acknowledgement in the league.