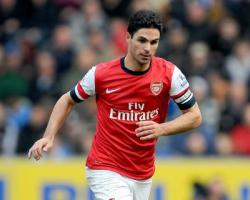 It has been nine frustrating nine years since the Gunners last held a trophy aloft, resulting in scrutiny and mounting pressure on the man at the helm.

Fans and pundits alike have made their annoyance known during that period, with that talk fuelled in February by Chelsea manager Mourinho calling Wenger a failure specialist.

The Arsenal boss refused to bite back at what he called "silly, disrespectful remarks" but they clearly irked him, as well as midfielder Arteta.

"If, for you, success is only to win a trophy, it doesn't matter how, then I think he (Wenger) is the way he (Mourinho) is saying," the Spaniard said.

"If you analyse everything he has done for the club, then if he is a failure I have a different opinion.

"I don't like it when someone criticises my team-mates, the staff, the manager, the club because I see what he does every day to look after this club.

"When they are right maybe you can accept, everybody makes mistakes

You can criticise the manager, whoever, but when it comes in a certain moment in a certain way I don't like it."

This weekend's Wembley showdown against Hull offers Arsenal the perfect chance to answer Mourinho's criticism, winning what would be a first trophy since the 2005 FA Cup.

"Of course, when you win a trophy and you don't win it is very different," Arteta said.

"With the history we have over the last nine years without any trophies at all, obviously it could be a great turning point.

"It's something else apart from the trophy as to what it can mean to the club, to the fans, to everyone.

"I have not played in a cup final, I had an opportunity with Everton [but injured my cruciate a few weeks before].

I was very surprised with the atmosphere we got in the semi-final against Wigan, so I imagine how it is going to be like on Saturday.

"It's a great opportunity it's great to be there

It's a big incentive to win."

It is a chance Arteta knows Arsenal "absolutely" have to take as "it is only going to get harder" to break the trophy drought the longer it goes.

"What I sense is a big determination.

If it was different I would say that but it's not the case."

With no World Cup commitments to deal with, this will be Arteta's last match before a summer in which he wants to sit down with the powers that be at Arsenal.

The 32-year-old midfielder only has one season left on his existing deal and, while relaxed about his future, is hoping the club can see past his age to what he offers.

"I don't know what is going to happen," Arteta added

"With players over 30 they have a policy and I don't know if they plan change it or maintain it.

"Depending on what their mind is I will give them my opinion and how I see it.

"I don't value players by age, whether it is Tomas Rosicky or Jack Wilshere

I analyse many other things before age.

"For the club, it can be an asset

"I understand the club's point of view - Mikel is not a ?25million player because he is not 22 anymore - but I know what I can give.

"So it is to find the right balance between mentalities is something that we need to analyse and talk about."